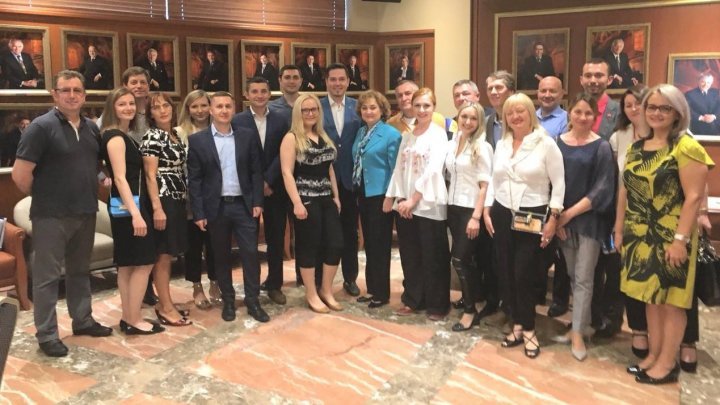 Ottawa - Diaspora is a factor for strengthening the Republic of Moldova's relations with Canada in all areas, a promoter of the image and interests of our country. The statement was made by the Minister of Foreign Affairs and European Integration, Tudor Ulianovschi, during the meetings with the representatives of the citizens' associations of the Republic of Moldova, established in Canada.

During the meetings with representatives of the Moldovan community in the provinces of Quebec and Ontario, Minister Tudor Ulianovschi has pressed the activism and dedication of the citizens living in the whole of Canada in promoting national identity, maintaining close relations with the country and promoting a favorable image of the Republic of Moldova.

"The numerous cultural, artistic, educational and sporting activities organized by the diaspora in Canada reconfirm its added value in efforts to promote national values and to confirm the communion of values between the Republic of Moldova and Canada," the head of Moldovan diplomacy said.

In this context, Minister Tudor Ulianovschi mentioned the effective cooperation between the many diasporal associations operating in Canada and their initiatives, highlighting the creation of the Diaspora National Council in Canada, setting up a calendar of associations' activities, creating a horizontal consultation network between the Embassy The Republic of Moldova in Ottawa and members of the associations.

"I think your experience should be discussed during the Diaspora Days in the Republic of Moldova, which will take place this year between 17th and 19th of August in Chisinau under the patronage of the Government of the Republic of Moldova and sent to the citizens of other states as an example of unification the potential of the diaspora, the achievement of objectives with effect both for the members of the diaspora and for the country of origin ", the head of the Moldovan diplomacy said.

In this context, the representatives of the community present at the meetings shared their experiences regarding the participation in the Diaspora Engagement Hub programs, the Diaspora Engagement Hub, the Professional Return of the Diaspora, etc. Thus, from the Canadian diaspora, three projects focusing on social assistance, technology transfer and cultural field have passed the national selection, to be achieved during the current year.

During the Montreal and Ottawa meetings, the interlocutors also addressed a series of problems faced by our foreign nationals abroad in the development of their business in Moldova, highlighting the biurocratic barriers encountered, and the importance of adapting an advanced entrepreneurial culture.

Minister of Foreign Affairs and European Integration, Tudor Ulianovschi, is taking a working visit to Canada from 10 to 13 June.