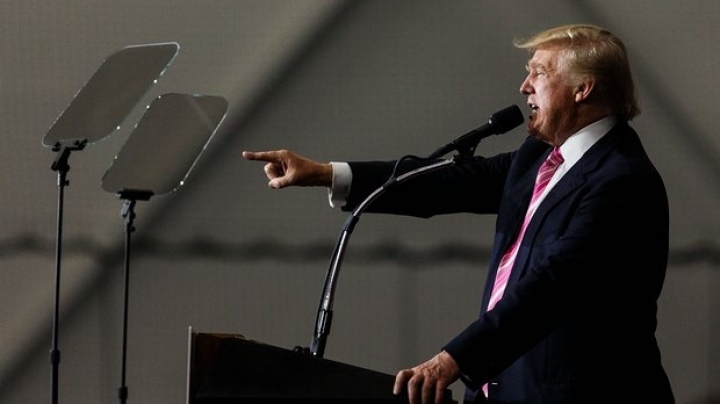 Donald Trump was reeling from the biggest crisis of his campaign on Sunday, after the publication of documents suggesting the wealthy Republican nominee may have been able to escape paying income tax for nearly two decades, reports The Guardian.

In a direct challenge to his claim to be a successful businessman and a champion of America’s hard-working middle class, the anonymously leaked tax returns reveal how Trump used aggressive accounting tactics and the failure of several businesses to claim a loss of $916m in his 1995 personal filing.

Independent experts say under US rules, this could be large enough to legally shelter hundreds of millions in income from years of federal tax – despite Trump’s high-rolling lifestyle and criticism of others for avoiding tax.

Trump did not deny the damning conclusions drawn by the New York Times, which first received the filing in a manila envelope said to have been sent from inside Trump Tower. But he threatened to sue the newspaper for what he insisted was “illegally obtained” material.

“The only news here is that the more than 20-year-old alleged tax document was illegally obtained,” the campaign said in a statement, “a further demonstration that the New York Times, like establishment media in general, is an extension of the Clinton campaign, the Democratic party and their global special interests.”

The editor of the New York Times recently said he was prepared to risk prison to publish Trump’s hitherto secret tax returns. The Times pointed out in its report that the documents it had obtained did not suggest Trump had done anything illegal.

The veracity of the document was also confirmed by Trump’s former accountant, Jack Mitnick, who told the paper he had to manually input the figure in question because tax preparation software did not allow for nine-digit losses.

Instead, the Trump campaign embarked on a damage control exercise on Sunday, dispatching surrogates to television talk shows to argue that Trump was clever to exploit the painful collapse of his past business ventures, several of which defaulted on creditors by declaring bankruptcy.

“The reality is he’s a genius,” former New York mayor and Trump supporter Rudy Giuliani told NBC. “He did something we admire in America: he came back.” New Jersey governor Chris Christie also told Fox News Sunday the story was “very good” for the candidate as it showed “the genius of Donald Trump”.

The argument is consistent with an explanation given by the candidate himself, who claimed he was being “smart” when pressed by his rival, Hillary Clinton, on tax avoidance during their first presidential debate.

Yet the scale of the 1995 loss appears to confirm suggestions made by Democrats that Trump has refused to follow 40 years of tradition and publish his tax returns because they would show he didn’t pay any.

“Trump is a billion-dollar loser who won’t release his taxes because they’ll expose him as a spoiled, rich brat who lost the millions he inherited from his father,” Democratic Senate minority leader Harry Reid said on Sunday. “Despite losing a billion dollars, Trump wants to reward himself with more tax breaks on inherited wealth while stiffing middle-class families who earn their paychecks with hard work.”

The revelations follow a poor debate performance, sliding poll numbers and a week of distracting arguments with a former Miss Universe winner, whom Trump had called “Miss Piggy” in the 1990s. On Friday Trump falsely accused her of having a “sex tape” only hours before reporters found he had made a cameo in a Playboy video.

Many such embarrassments have failed to dent Trump’s popularity in the past, but the tax question goes to the heart of his claim to represent struggling US workers.

Trump has proposed a tax plan that would cut taxes for all Americans, but analysis by the conservative Tax Foundation found it would disproportionately help the richest Americans, saving them millions.

In a statement, Trump’s campaign defended his record, saying he “is a highly-skilled businessman who has a fiduciary responsibility to his business, his family and his employees to pay no more tax than legally required”.

The campaign offered no specifics about how much Trump may have paid in these taxes, or when.