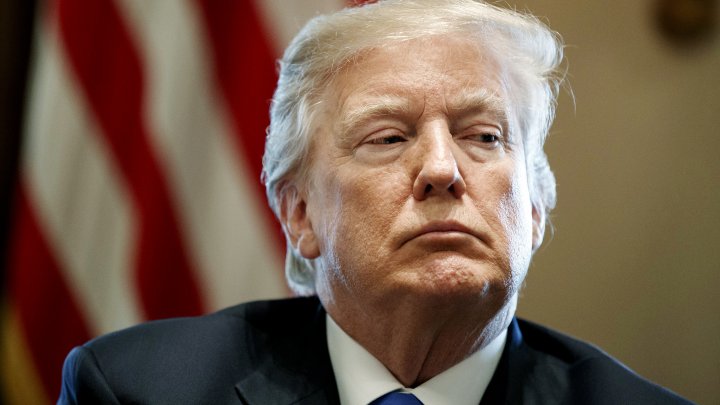 President Donald Trump warned Syria and its allies Russia and Iran on Monday against attacking the last major rebel stronghold of Idlib province in the country's northwest, writes cnn.com.

"President Bashar al-Assad of Syria must not recklessly attack Idlib Province," Trump wrote on Twitter. "The Russians and Iranians would be making a grave humanitarian mistake to take part in this potential human tragedy. Hundreds of thousands of people could be killed. Don't let that happen!"
Hours after the tweet, Russian planes struck parts of western Idlib, according to an activist media group and Syrian rescue group the White Helmets. The White Helmets said rescues were underway amid "intensive airstrikes.
"The President's warning comes just days after Secretary of State Mike Pompeo issued a similar warning to Russia's foreign minister, Sergey Lavrov, saying an attack on Idlib was something that Syria and Russia "agreed not to permit," and that the US "sees this as an escalation of an already dangerous conflict."
US officials have grown worried that an assault on Idlib could involve the use of chemical weapons if the rebels are able to slow regime advances.
Syrian President Assad's regime has moved armed helicopters closer to Idlib in recent weeks, according to two defense officials. The US is concerned they could eventually be used to launch another chemical attack as well as a conventional assault.
The day before Pompeo's warning, Lavrov told Western nations not to "play with fire" over Idlib and claimed the White Helmets, a group of unarmed volunteer rescue workers, were preparing to stage a chemical strike to blame on the Syrian government as a pretext for military action.
The Pentagon responded Friday, saying, "Russia has recently launched a concentrated disinformation campaign to discredit the United States and international partners and allies" and calling Lavrov's allegation about preparations for a staged chemical strike "absurd."
CNN reported Friday that US intelligence and military targeting experts have created a list of Syrian chemical weapons facilities that could be struck if Trump decided to order a new round of airstrikes in the country.
So far, a decision to take action has not been made, but one administration official with direct knowledge of the situation told CNN the military "could respond very quickly" if Syria launched a chemical weapons attack.
Iranian Foreign Minister Javad Zarif arrived in Damascus on Monday, and told reporters he hoped that events in Idlib went the same as operations in the past.
"We hope that the province of Idlib will be cleared of terrorism the same way as with previous operations of the Syrian military, with the lowest casualties, such as the suburbs of Damascus and the southern provinces," Zarif said.
Earlier this year, weeks of violence displaced 320,000 people in the southern province of Daraa, after the Russian-backed Syrian military launched an offensive to recapture the town.
Eventually the rebels came to a reconciliation agreement with the Syrian government in which the fighters agreed to hand over their weapons to Syrian forces. Anyone who didn't want to be part of the agreement was to have been allowed to transfer to Idlib.
About 6.2 million Syrians have been displaced since the conflict began in 2011, with a further 6.3 million having fled abroad as refugees, according to a recent UNHCR report.

Idlib is home to some 3 million Syrians, according to United Nations estimates, and 70,000 fighters from multiple factions, including former al Qaeda affiliate Hayat Tahrir al-Sham. The heavy concentration of residents and fighters, analysts say, makes the province a powder keg.
"Idlib would see a humanitarian catastrophe that exceeds the level of any seen in the Syrian conflict so far," said Lina Khatib, head of the Middle East and North Africa program at the Chatham House think tank in London.
"You have the potential for civilians to be not just targeted by the regime but also to be caught in battles through which these rebel groups aim to defend against regime attacks," said Khatib.
Half of Idlib's population are displaced people, bused to the northwestern province from former rebel areas across the country. The northwestern province is densely populated, with many civilians flocking to camps near Syria's border with Turkey as they brace for an imminent attack.
Turkey, which has closed its border to fighters and civilians, has vowed that a regime incursion into Syria would constitute a "red line." But analysts say there is little that it can do in the face of Russian and Syrian resolve to root out the fighters.
"There's a lot of tough jihadists in the region and Syria's not going to digest them. The regime is not going to accept them, so they've got their backs against the wall," said Joshua Landis, director of Middle East Studies at the University of Oklahoma.
"They're facing death, and Turkey has made it clear that they're not going to take them."
Idlib hosts a ragtag group of rebels, including Chechen and Chinese Uyghur fighters. In 2017, Brett McGurk, the special presidential envoy for the global coalition against ISIS, called Idlib province "the largest al Qaeda safe haven since 9/11."
"There's no good solution to this. It's a very raggedy ending to a horrible war which has had nothing but tragedy," said Landis.
AFLĂ imediat Știrile Publika.MD. Intră pe Telegram