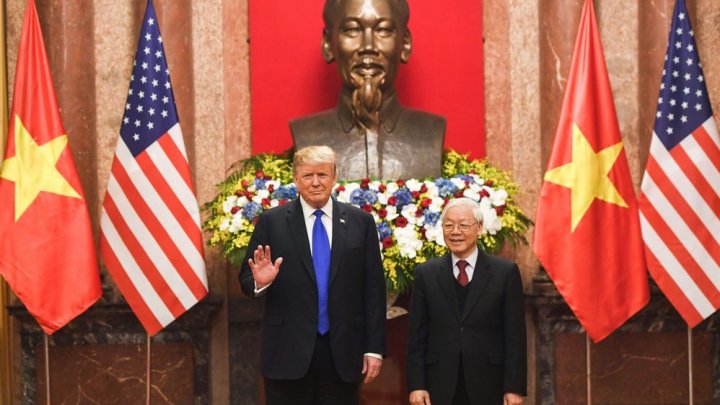 U.S. President Donald Trump and North Korean leader Kim Jong Un will face each other this week for their second summit in less than a year.

But first, Trump has a raft of events with officials from Vietnam, which is playing host to the U.S.-North Korean talks for two days, writes CNBC.

The American president kicked off his Wednesday schedule with a visit to the Presidential Palace in Hanoi, where he met with Vietnamese President Nguyen Phu Trong for a photo op and bilateral talks. During that meeting, Trump praised Vietnam's "thriving" economy, and said the country is "an example as to what can happen with good thinking."

Those compliments were set against the backdrop of Trump saying in a morning Twitter post that North Korea's economy could do as well as Vietnam's if Kim agreed to give up his nation's nuclear weapons.

After his time with the Vietnamese president, Trump headed to meetings with Vietnamese Prime Minister Nguyen Xuan Phuc.

The North Korean portion of Trump's public schedule will begin later on Wednesday when he meets with Kim for a one-on-one conversation. After that, he'll have what the White House described as "a social dinner" with the dictator.

"He can do it in a very, very rapid time — make North Korea into a great economic power," the U.S. president added, continuing his campaign to convince Kim that this week's summit is the young leader's best chance to kick-start an economic boom in his country.

Most news from the talks is likely to come on Thursday. The two sides are expected to hold meetings throughout the better part of that day, and some form of statement or signing is likely at the summit's conclusion.

That was how Trump and Kim closed their summit in Singapore last June. The leaders held a signing ceremony for a declaration that said both sides would commit to establishing better relations and that North Korea "commits to work toward complete denuclearization of the Korean Peninsula."

Last year's meeting marked the first in-person meeting between a sitting U.S. president and a North Korean head of state.

Trump heralded that agreement as "very comprehensive," but outside observers downplayed its importance because of a recurring diplomatic issue with Pyongyang: North Korea has a different definition for "denuclearization" than others.

Pyongyang has said in the past that it may denuclearize only if certain conditions were fulfilled. Those include the U.S. withdrawing troops from South Korea as well as ending the U.S. regional nuclear umbrella, a security arrangement in which Washington promises in-kind retaliation on behalf of close allies if they are attacked with nuclear weapons.

American and North Korean sides still appear far apart on the idea of North Korea getting rid of its nuclear weapons.

"So far, North Korea seems only willing to take measures that limit its nuclear and missile capabilities — it has no indications that it wants to roll back or undercut its existing nuclear arsenal or missile arsenal," Tong Zhao, a fellow at the Carnegie-Tsinghua Center for Global Policy, told CNBC on Tuesday.

Reports since the last Trump-Kim summit suggest North Korean forces are continuing to develop missile technology and nuclear weapons in secret facilities. A U.S. intelligence report last month said that North Korea was "unlikely to give up" its weapons of mass destruction, missiles or production capability.

Trump has repeatedly pointed out that no one has detected North Korea testing nuclear devices or ballistic missiles since his administration began engaging with the Kim regime in earnest.

For a period in 2017 — Trump's first year in office — North Korea created global anxiety by testing missiles at least once a month and directing regular threats toward the United States and others. Trump declared in August 2017 that such threats "will be met with fire and fury like the world has never seen."

Pyongyang is last known to have conducted a nuclear test in September 2017 and an intercontinental ballistic missile test in November 2017.

Trump has appeared to downplay the goals for this week's summit. Whereas last year he claimed the North Korean regime would begin removing its nuclear capabilities "very, very quickly," he said last week that he was in no hurry.

"Well, I'd just like to see, ultimately, denuclearization of North Korea. I think we will see that ultimately. I have no pressing time schedule," he said from the Oval Office last Tuesday. "And I think a lot of people would like to see it go very quickly from the other side."

Still, as recently as Monday Trump was promoting the idea that Pyongyang could completely denuclearize. He said in a Twitter post, "With complete Denuclearization, North Korea will rapidly become an Economic Powerhouse. Without it, just more of the same. Chairman Kim will make a wise decision!"

What does North Korea want?

As for North Korea's goals, analysts said the country is probably willing to remove some capabilities it no longer needs and may agree not to increase the size of its arsenal. But Kim won't give up his nuclear weapons, they said.

Victor Cha, Korea chair at the Center for Strategic and International Studies, predicted during a discussion in Washington last week that Kim's approach will be to "actually not really giving up anything." At the same time, he'll have "clear demands for the United States to give up things very much in the present" possibly including military exercises, troop deployments and sanctions.

North Korea currently faces United Nations sanctions and separate sanctions from the United States. The UN blocks some imports and exports and has frozen the assets of individuals connected with Pyongyang's nuclear program. The United States restricts the North Korean economy further and targets more individuals.