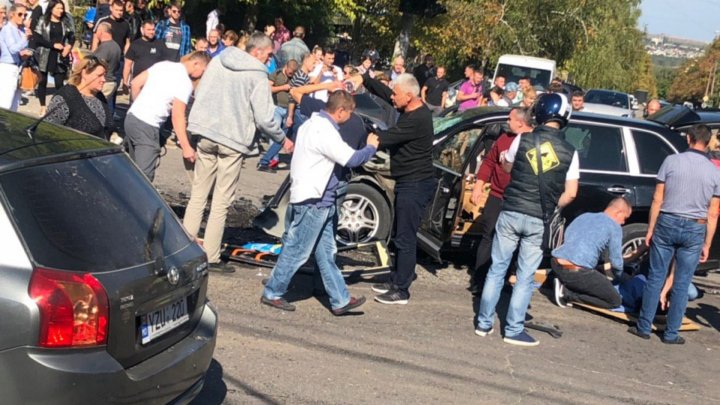 (UPDATE 16:12) According to the chief of Emergency Medicine Department Igor Curov, 22 persons were transported to hospital including a person in extremely grave situation.

Publika specifies that a person was killed after this accident.

(UPDATE 15:35) Chief of Electric Transport Administration confirms that the car rammed into and ripped out the trolleybus. Nobody who was waiting at the station got injured.

(UPDATE 15:23) Chisinau Police has announced that a middle-aged man (bus passenger) and a woman (car passenger) were killed after this accident.

(15:20) According to the spokeswoman of IGSU Liliana Puscașu, 19 persons were injured including a 13-year-old girl. The most injured people are bus passengers.

(UPDATE 14:53) According to the spokeswoman of IGSU Liliana Puscașu, six persons who were in the trolleybus and other two passengers of the car were injured.

(UPDATE 14:40) According to the rescuers, two persons in the car and a person in the trolleybus were injured.

Firemen and policemen are on the scene.

(14:38) According to police, the road accident occurred on Monday at 14:13 at the intersection of O.Ghibu st. and Alba Iulia st. between a trolleybus no. 21 and a Porsche car.

At least a person was killed after accident, doctor says.

The accident was so violent that the trolleybus jumped on sidewalk.