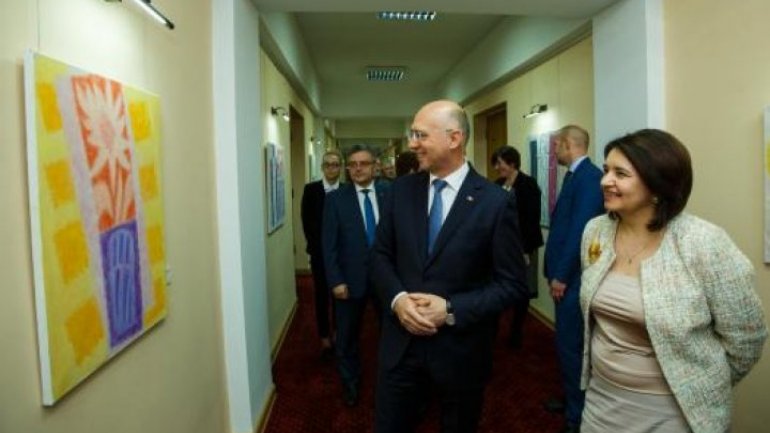 The main corridor's wall are not covered pieces of art, namely the one where the Prime Minister's cabinet is located, as it is also the busiest one.

The Prime Minister stressed that the initiative of organizing the event came from the desire to capitalize and promote the national art.

Since the one, members of delegations visiting Moldova have stopped to enjoy the view.

"Those that come to the Government and there are a lot of them, must have the chance to see how beautiful Moldova is from the inside. We have talented people that must be promoted. I loved the idea that this expositions meant to show "Transparency". As this is the motto we decided to lead the Government on", Prime Minister Pavel Filip declared.

The painter Mihai Ţăruş thanked the authorities for the opportunity to exhibit his works in the Government and to convey to the audience the inner states of art.

"For me transparency existed for a long time. It is hard to express with words, painting can do a better job at it" artist Mihai Ţăruş said.

The works were also appreciated by members of Cabinet of Ministers.

"Master Ţăruş demonstrated through his work that the Republic of Moldova is Europe on the move and that we can show the most beautiful values through our culture people," Minister of Education, Culture and Research, Monica Babuc said.

"I like this exposition, especially since it comes after years of those halls being empty and gloomy. This exhibition, this art, has radically changed the atmosphere" Minister of Foreign Affairs Andrei Galbur expressed.

The Government wish to host such expositions periodically.

Mihai Țăruș is a known artist, whose works are appreciated both in Moldova and abroad.

His works have already been presented in renowned galleries from United States of America, Finland and France. The Transparency exposition has 21 works and one was already sold.