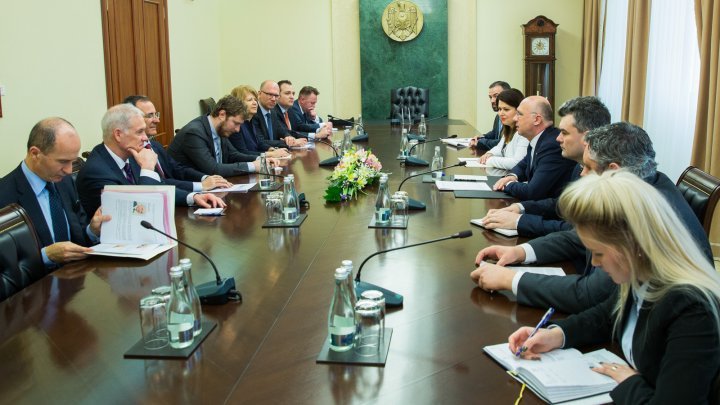 Prime Minister Pavel Filip and the special representative of the OSCE Chairman-in-Office of the Transnistrian settlement process, Franco Frattini, have made an exchange of views on the developments in the Transnistrian dimension.

Pavel Filip officially congratulated him on taking over the mandate of the OSCE Special Representative for the Transnistrian issue and believed that his vast experience would boost the Transnistrian settlement process so that a new reunion in the "5 + 2" format is successfully organized.

"I assure you that we're all open and determined to advance and seek for solutions to this conflict", said the Premier Pavel Filip.

In the context, the parties examined the implementation of the five protocol decisions which agreed to solve major issues of concern to the population on both banks of the Dniester: the opening of the bridge near Gura Bâcului and Bâcioc, the proper functioning of Moldovan schools with teaching in Latin, application of apostille on study papers issued in Transnistria, access to agricultural land located on the Tiraspol-Camenca route, interaction in the field of telecommunications.

The prime minister assured that this year, the authorities will focus on implementing these decisions and identifying viable solutions to other current issues on the agenda of the negotiations (solving the problem of Transnistrian plate cars, removing barriers to free movement between two banks, situation in the Security Zone, clarification of the situation of criminal cases).

Franco Frattini, OSCE special representative on Moldo-Pridnestrovian settlement appreciated the government's commitment to implement all the objectives set out in the Vienna Protocol.

At the end of the meeting, Pavel Filip pointed out the importance of effective communication regarding the Transnistrian settlement process and assured that, despite the election year, the Executive will have a rational approach and will focus on delivering positive results, including this dimension.