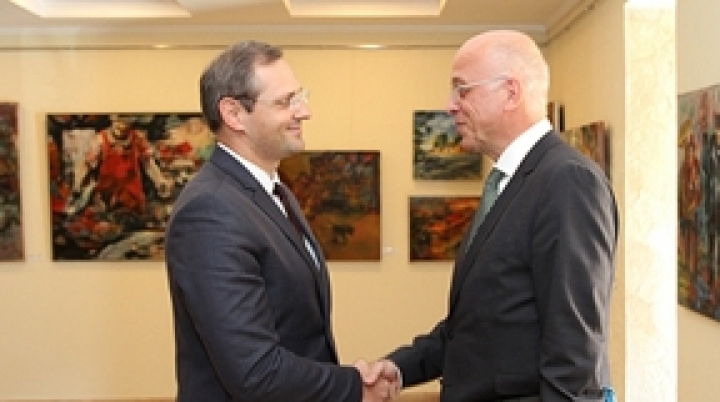 No progress has been reached in realization of the Berlin Protocol, so Transnistria is soliciting for organizing a new meeting of the 5+2 negotiating format parties [Moldova and Transnistria as the conflicting sides, Russia, Ukraine and the OSCE as international mediators and guarantors (5); and the European Union and the United States as observers (2)] to brisk up the negotiating process, Transnistria’s minister of foreign affairs Vitaly Ignatiev stated in his meeting with the Special Representative of the German OSCE Chairperson-in-Office for the Transnistrian Settlement Process, Ambassador Cord Meier-Klodt, in Tiraspol on Tuesday.

Transnistria’s chief negotiator underlined the extremely low dynamic of interaction with the Moldovan side, and Chisinau representatives’ unpreparedness for a systemic, concrete work, including along the directions reflected in the Berlin Protocol, Infotag informs.

A particular attention in the conversation was attached to the situation in the sphere of freight railroad communication via the Transnistrian territory.

“This problem is broader than just a fuel crisis. It has a complex-like character because the Moldovan side, supported by Ukraine, violates the agreement that was signed in 2012 and will expire at the end of 2016”, said Vitaly Ignatiev.

He spoke out for achieving a new optimum accord that would let all railroad communication stakeholders to receive advantage. He handed in a draft document on the issue to the OSCE Special Representative.

“The Transnistrian side has worked out a new document – the draft agreement with supplements and technological schemes that describe in detail the mechanism of transit, exportation and importation of cargoes intended for Transnistrian economic agents, as well as a customs control formula”, said Vitaly Ignatiev and asked the high guest to pass the document to all negotiation participants.

According to the Transnistrian foreign ministry, Cord Meier-Klodt promised to scrutinize the Transnistrian side’s proposals. He said the German OSCE presidency is approaching completion, so it is necessary to maintain the positive impulse, which was imparted to the negotiating process earlier this year.

“I am determined to preserve what has been achieved in 2016, in particular the activity in the 5+2 negotiating format and realization of the achieved roadmap”, said the German diplomat.

As already reported by Infotag, at the beginning of the year Cord Meier-Klodt managed to persuade Chisinau and Tiraspol representatives to resume the negotiating process. The 5+2 format parties met in Berlin in early June and signed a Protocol consisting of 7 items. The parties were projecting to fulfill the document within subsequent 6 weeks – by the informal conference on confidence-building measures that was scheduled for mid-July in Germany, at which they were going to set a date for resuming full-scale negotiations in the 5+2 format. However, the Berlin Protocol failed to be fulfilled and the negotiations were not resumed.