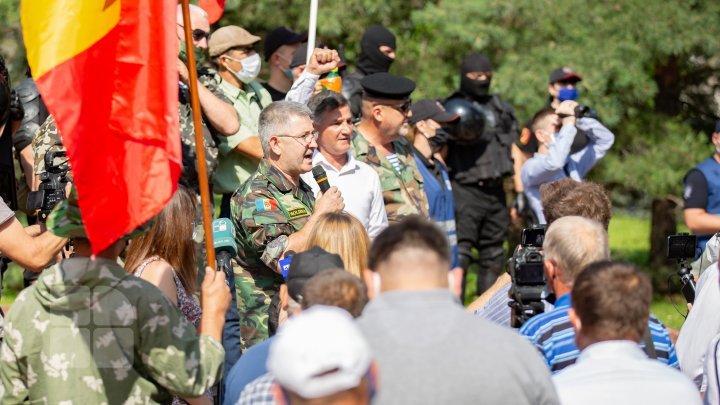 The veterans of the Dniester war rallied in front of Parliament today for several hours with a list of demands, blocking a portion of Stefan Cel Mare Street.

During the protest, the trolleybuses were directed on Bucharest Street and four vehicles stuck on the boulevard were later towed.

The main requirements for veterans include lowering the retirement age, providing free medical policies and removing illegal posts in Transnistria.

"We demand our rights, which we fought for the independence of the Republic of Moldova. We already see that our lands are being sold in Transnistria", said a protester.

"They are traitors, you see they are being sold from one party to another. They are the traitors of the country, they must all be shot here," said a veteran who came to protest.

Several members of the bloc ACUM and PDM MP Alexandru Jizdan showed up in front of the veterans. The Democrat wanted to explain to the protesters why their demands could not be examined today, but he was booed by veterans.

In the meantime, Parliament has approved a bill that allows veterans to receive free health insurance if they are not officially employed. Five protesters were invited to talks without the presence of veteran Anatol Macovei.

Following the actions during the protest, the law enforcement officers initiated a contravention procedure. According to the deputy head of the National Inspectorate of Public Security, Alexei Grosu, people who urged others to block the street risk a fine of up to 3,000 lei. Moreover, for non-compliance with the protection rules against COVID-19, the organizers of the event could be sanctioned with up to 25 thousand lei.