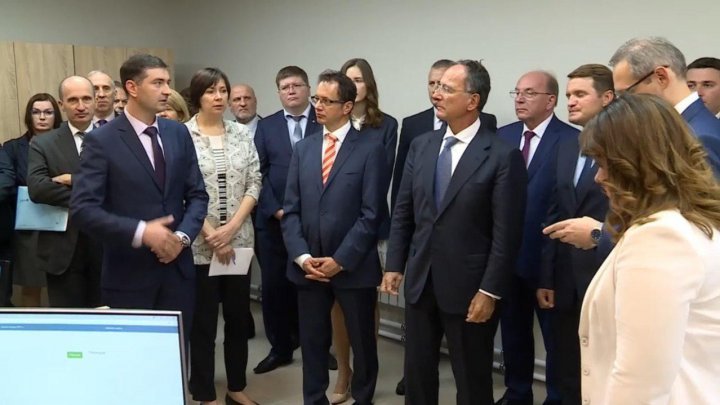 foto: PUBLIKA.MD
The protocol decisions, signed between Chisinau and Tiraspol, proved their efficiency and benefited the inhabitants of both banks of the Nistru. At the same time, by signing these documents, the parties showed willingness and political maturity. The opinion was expressed by the Head of the OSCE Mission to Moldova, Claus Neukirch at the "Transnistria Dialogues" conference organized today in Chisinau by the Institute for Strategic Initiatives.

In 2017 and 2018, the political representatives of Chisinau and Tiraspol signed several protocol decisions aimed at bringing the two banks of the Nistru near.

One of them provides pupils from the Transnistrean region with access to studies, as well as a token rental fee for Romanian language schools. According to another protocol, the farmers from Dubasari district have regained their ownership and access to their own lands located on the left bank of the Nistru River. At the same time, the authorities agreed that the diplomas awarded by the University of Tiraspol would be apostilled, which allowed several students to continue their studies abroad. One year after the implementation of this mechanism, more than 240 diplomas were applied to countries such as Italy, Bulgaria, USA, France, Austria, Spain, Poland and the United Kingdom.

"I think it is important with this idea to continue with this dialogue because the population on both sides of the Dniester took advantage of these decisions. At the same time, we created trust between the two sides", said the head of the mission OSCE in the Republic of Moldova, Claus Neukirch.

Another success in the relationship between Chisinau and Tiraspol was registered due to the introduction of neutral registration numbers for cars in the Transnistrian region. This mechanism allowed, for the first time, drivers from the left bank of the Dniester River and the city of Bender to travel outside the Republic of Moldova.

"Only from the moment of launching the mechanism on September 1, 2018 and up to now over three thousand driving permits have been changed into those of the Republic of Moldova", vice Prime Minister for Reintegration, Cristina Lesnic said.

According to another protocol signed last year, is to re-establish the fixed and mobile telephone connection. Chisinau authorities say they still have to work on solving this, but also on other issues.

"An issue that remains unresolved is the access of officials to the Transnistrian region." The issue of importing medicines through the eastern border is very important for food safety and security. "We are open to dialogue, which must be constructive," said Cristina Lesnic, Deputy Prime Minister for Reintegration .

Experts from the left bank of the Nistru River recognize that the decisions made are fruitful.

"It is a big success, perhaps the biggest one in the 25 years of negotiations, that progress has not been made, and this is also due to the international situation" , said the expert, Tiraspol, Igor Sornicov.

This year, the Government will spend five million more for developing and modernizing the localities in the Security Zone. In total, 15 million lei were allocated for 35 projects.
loading...
AFLĂ imediat Știrile Publika.MD. Intră pe Telegram