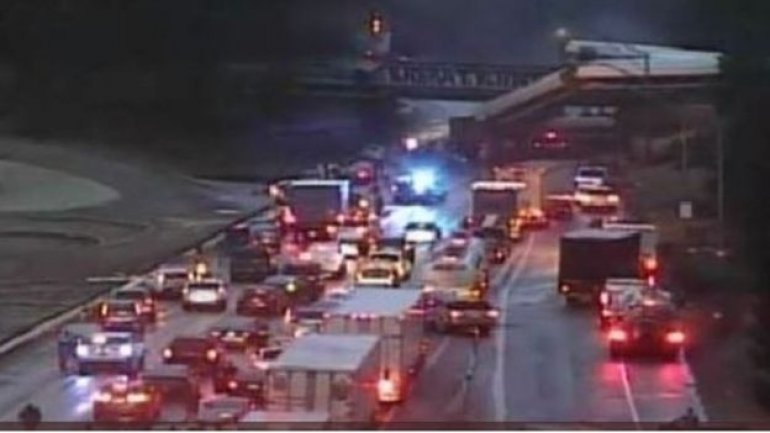 foto: It is unclear if the train landed on any cars below/WASHINGTON TRANSPORATION BOARD

Sheriff department spokesman Ed Troyer said that there were "multiple" fatalities on the train, but no motorists had been killed.

The fire department had taken many people out of the train and they had been taken to hospitals, he added.

Passenger Chris Karnes, on board the train, said the carriage he was on careened down an embankment then came to a stop: "We could hear and feel the cars crumpling and breaking apart, and water came out from the ceiling."

"In order to get out... we had to kick out the emergency window," he said.

Amtrak said that there were approximately 78 passengers and five crew members on board the train.

The incident happened near DuPont, which is southwest of Tacoma.

Officials have set up a family reunification centre at DuPont city hall, and asked people not to come to the scene of the crash.

[19:24] Two train carriages have plummeted on to a motorway in Washington state leaving a number of casualties.

The train derailed and the carriages fell on to the I-5 highway below.

Images from the scene show emergency services treating people on the ground. Amtrak confirmed there had been injuries.

Several cars on the highway were struck by the derailed carriages, the Pierce County Sheriff's department says.

There are multiple injured motorists, it added.

Local news stations report that this was the inaugural run of the new high-speed rail line.

Two train carriages have plummeted on to a motorway in Washington state leaving a number of casualties.

Before the crash, it was travelling at more than 80mph (130kmh), with at least 75 people aboard.

The National Transportation Safety Board is investigating.