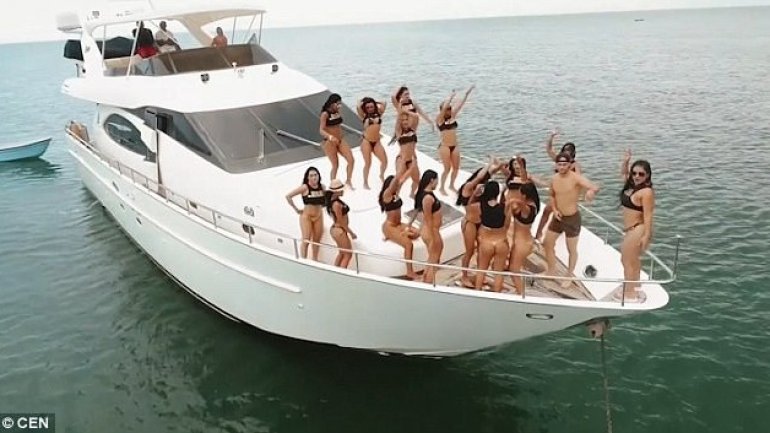 Authorities have vowed to act after the video offered unlimited sex with Colombian prostitutes in Cartegena.

But tourists drawn to the country by the advert could be kicked out, according to the Mirror.
It starts by advertising the holiday’s more prosaic benefits such as airport transfers being included.

Then, its young male star boards a luxury yacht, on the deck of which dozens of young beauties are gyrating in bikinis.

The holiday is also labelled as 'drug friendly' over images of the young man being caressed in a bedroom by several girls amid a cloud of smoke.

'Sexual surprises' are also advertised, over a scene showing the man coming into his bedroom to find four naked women posing coquettishly face-down on his bed.

Tourists with other appetites may like to know that all meals are included, a fact mentioned over a scene of the man eating his pudding off the naked body of one of the video’s female stars, served by another in a fetish version of a French maid’s outfit.

Free booze is also thrown in.

The Good Girls Company explained more via social media, writing: 'We will have 60 hot women serving 30 clients; there will be two women for each of them (available) 24 hours a day. The price includes all meals these days.'

The location of the 'sex island' is off the coast of Cartagena on the north coast of Colombia.

An itinerary for the holiday tells prospective guests that there will be a sex session on the first day in which any customer can participate.

Day Two offers each client half an hour with 16 girls at once.

The third and fourth days feature parties on a luxury yacht for 100 people, complete with DJ.

Although prostitution is not illegal in Colombia, pimping is a crime, a law services advertised in the video could be falling foul of.

MailOnline has contacted the Good Girls Company to clarify this, but are yet to receive a response.