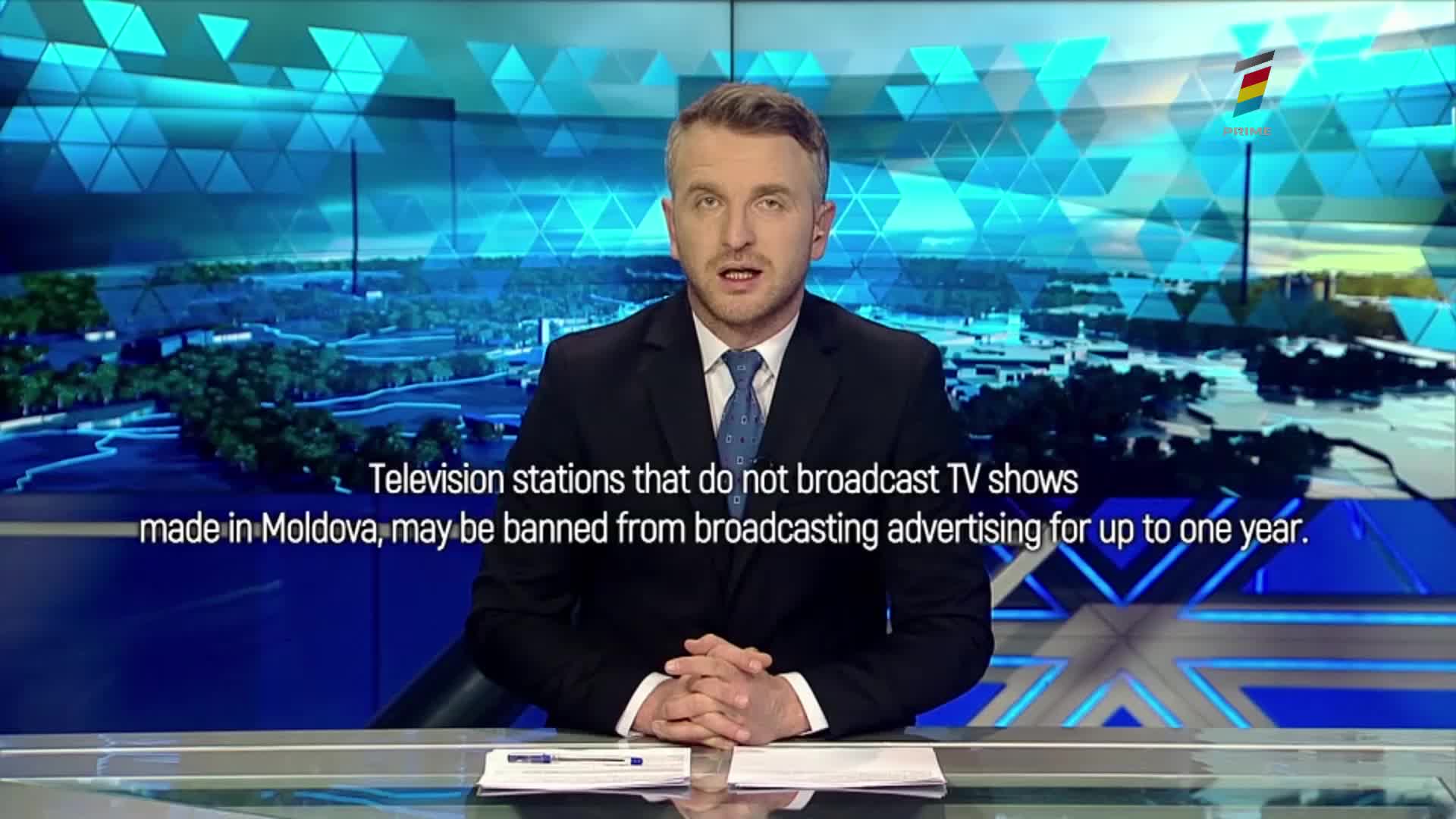 Television stations that do not broadcast TV shows made in Moldova, may be banned from broadcasting advertising for up to one year. The new sanction is found in the draft law regarding the security of the informational space, adopted by the parliamentary majority in the first reading. Thereby, the Parliament would offer to the Audiovisual Council new ways of taking responsibility for the TV stations that refuse to respect the mandatory quotas of local programs and have the parasitic practice of rebroadcasting. Namely, the administrator of such a television, Natalia Poleacova, from ITV, asked, with guts, the deputies to reduce the mandatory quotas of local product. In response, the director of the Independent Press Association, Petru Macovei, recommended her to do business in other fields if she cannot comply with the audiovisual legislation.

The administrator of ITV, a television station that mainly broadcasts series from Russian televisions, claims that the Moldovan state would not be entitled to oblige moldovan televisions to broadcast programs made in the Republic of Moldova.

NATALIA POLEACOVA, administrator of ITV: "If the government is supporting the TV station, then you can demand it. But to dictate to a television to produce eight hours one and the same. For example, news? Because we will not invent anything else. We will not be able to film TV series. But today when there is so much propaganda and false information and we can't determine what that is and how to fight it, then maybe during this period we need to substantially reduce the production, but not to increase it. "


PETRU MACOVEI, director of the API: "If you can't produce, deal with other bussines. It's the law. The frequency is a public good. It's not your private property. That's why there is a law. Laws have certain restrictions, it's true. We have to develop the audiovisual product, not to reduce it. On the contrary, we have to increase this volume. "

Even if the ITV administrator claims that he wants to comply with the law, only last year, this television was sanctioned 7 times, with a total amount of 60 thousand lei, for the lack of Romanian subtitles of the films and series they broadcasts and for violations related to the local production quotas.

- When we got our license, the laws were a little different.
- And you have had time to develop. If you can't grow, let others grow. What is the problem?
- We can do 10 or even 12 hours, but what kind of quality will it be?
- Still, can you do it?
- Of course. We will buy from our colleagues their transmission. And what will that be? Will all TV station look the same? That's what the public institution is for", said Petru Macovei and Natalia Poleacova.

The director of Jurnal TV, Adrian Buraga, explained that the obligation for moldovan televisions to broadcast eight hours of local production is achievable.

ADRIAN BURAGA, director of Jurnal TV: "I will refer to local content very shortly. It's not impossible. It's possible to produce local content at home. With many people, with older people, but to produce it at home. We are ready to comply with any legal provision that will be approved, including respecting the whole Code that is and will be improved. We respect this law and we fight for it. "

The debates come in the context in which the PAS project provides for a harsher sanction for televisions that cannot be held liable for fines. If they refuse to comply with the law and broadcast programs made in Moldova, then they will not have the right to broadcast advertising for a period of six to 12 months. And if this ban, imposed by the Audiovisual Council, will not be respected, it will lead to the suspension of the broadcaster's license. The representative of N4 television, Valentin Afteni, considers that the period of application of the ban for commercial communications must be shorter.

VALENTIN AFTENI, representative of N4 television: "An independent television, an independent radio station, without advertising for 3-15 days, is dying. So this is absolutely exaggerated and this is practically a death sentence."

LILIANA NICOLAESCU-ONOFREI: "I understand what you are saying, but these are penalties for violations. If there are no violations, we are not talking about sanctions."

The president of the Audiovisual Council, Liliana Viţu, considers that the disobedience reguarding the quotas of local programs is a serious violation of the legislation, reason for which she welcomes the decision of the deputies to tighten the sanctions for the televisions that try to avoid this obligation.

LILIANA VIȚU, president of the Audiovisual Council: "I don't think it's fair for someone to pay, to have a team, to pay salaries, to take care of where to get this advertising to pay salaries, and for someone else to sit pretty well and do not produce local content, and at the same time to participate in the ordinary advertising market with the others. You come to the board and ask for a license that you want to produce, then you are complaining that you don't want to produce. I can't understand this logic in general. "

The amendments to the Code of Audiovisual Media Services come in the context in which, by the decision made in March of the board of directors, the number of national televisions has increased from 13 to 41. And this means that another 28 televisions will be forced to broadcast at least eight hours of local content every day instead of four hours of regional television. This decision would ensure equal obligations for all televisions that have programs on the grid for viewers from all over the country and which are received by 2/3 of the population, says Liliana Viţu.

LILIANA VIȚU: "I think the main thing we wanted to solve is this very lack of fairness and unequal and unfair conditions, in which someone must operate to produce for eight hours, and who are trying to find resources. And those who were pretty well and were rebroadcasting by hiding behind the regional category. "

The president of the Audiovisual Council claims that the institution he leads has decided that the reclassification of regional TV stations into national ones will come into operation on September 1, so as not to overlap with the summer holiday schedule.

LILIANA VIȚU: "There can be no more talk of a grace period, of a period of transition, a period in which “let's be more sympathetic”. That's why I went on a much longer term than 3 months. Just so we don't get to September 1st and we didn't know, we weren't prepared, give us more, save us more. No! The monitoring is done for a week and we can expect and plan at the board that in the second week of September we will have the monitoring of how the new stipulations of the first half of September are observed. "

According to the law, out of the eight-hour daily quota of local programs broadcast by national television, half can be replayed, and 80 percent must be made in romanian.