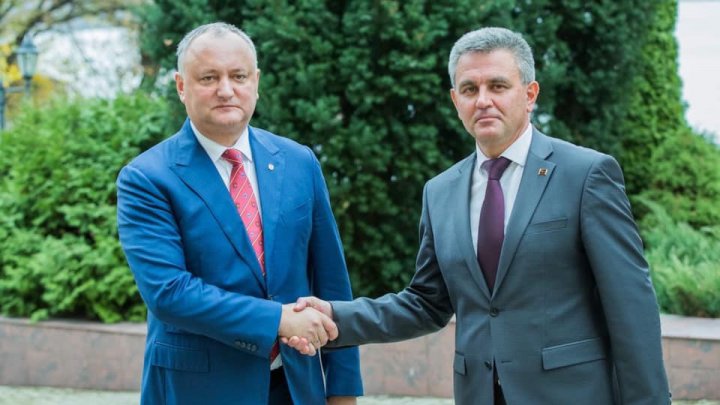 President Igor Dodon met with the leader of the Transnistrian region, Vadim Krasnoselsky, at the Holercani residence on 29 October.

According to the press of the left bank of Nistru, they continued discussing the existing issues on agenda and they outlined some perspective themes. The parties managed to establish some concrete data and solutions including in the field of telecommunication, political files and transport.

However, the solutions for the banking issues yet to be identified, this being one of the principle topics which will be discussed further on, according to TSV of Transnistria.

Igor Dodon also wrote on his Facebook that "the situation that arose in the process of solving the Transnistrian issue requires both parties to maintain a permanent dialogue and elaborate more carefully the issues on agenda."

"We discussed other issues of economic and social nature, which concern the interests of inhabitants and economic agents on both banks of the Dniester river, including the extension of regime of free movement of citizens, goods and services throughout the territory of Moldova.

The parties mentioned the common interest for not admitting any impediments in security area, which could disturb the peace and stability in Moldova. We reaffirmed the importance of the peacekeeping operation on the Dniester as a guarantee of the regional peace and security. We approached our positions so as to develop approaches for their perspective implementation.

On the eve of the Bavaria Conference, scheduled for 04 – 05 November, we reiterated the readiness to continue an open dialogue at different levels and stages, which will help to establish trust between the residents of both banks of the Dniester river. We agreed that in addition to official contacts, an important factor contributing to promotion of political regulation process is the activity of public institutions", quoted the Facebook post.