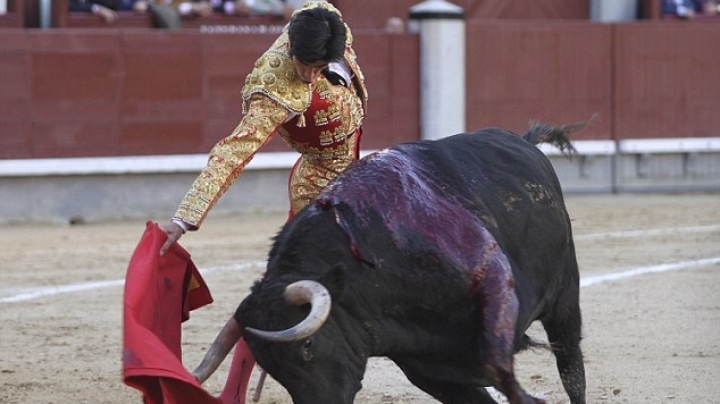 An award-winning bullfighter has been gored to death live in front of hundreds of terrified spectators, including his wife - the first matador fatality in Spain since the turn of the century, reports Daily Mail.

Segovia bullfighter Víctor Barrio, 29, suffered a mortal blow during his performance screened on television, in the town of Teruel in Aragon, Eastern Spain.

His shocked wife, Raquel Sanz, was among the audience and witnessed the tragedy, while Barrio's fellow matadors rushed to try to help him.

Ms Sanz, who married Barrio in 2014, was said to be 'devastated' as she saw her husband lying motionless on the ground, according to El Espanol.

The matador was taken to hospital unconscious but doctors could not do 'anything' to resuscitate him and save his life.

He rolled to the ground in a painful somersault after the 87 stone beast caught him while he tried to deflect it with 'muletazo' manoeuvre, reports La Razon.es.

The report said Barrio was gored in the right chest and was in cardiac arrest by the time he was in hospital.

He underwent immediate resuscitation and was intubated. He also was given an emergency tracheotomy to allow him to breathe.

However, the bull had speared Barrio through the lung and severed an aorta in his chest carrying oxygenated blood around his body.

There was also damage around his heart.

The Los Maños bred bull, named Lorenzo, had reportedly been struggling but caught the showman off guard after a gust of wind affected his waving of the crutch.

The horrific goring was shown live on TV, and viewers have uploaded footage of the scene on social media.

After going into cardiac arrest in the hospital there was no hope for Barrio, who died of a fatal goring with a perforation of the lung and thoracic aorta.

In his final tweet on July 4, Barrio posted a picture of him in training, writing: 'With the mind set on Teruel.'

During bullfights the matador takes the lead role in killing the animal, usually clad in the opulent red and gold 'traje de luces' (suit of lights).

Now the lineage of Lorenzo the bull is set to end. As tradition dictates, the rancher will send his mother cow to the slaughterhouse, reports Cultura.

Although deaths from Spain's famous bull runs are relatively common, with up to around 10 deaths recorded each year, worldwide the last matador death was in 1985.