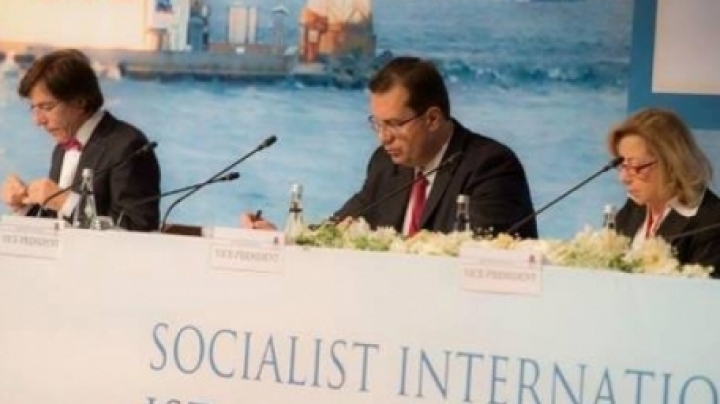 Democratic Party leader Marian Lupu attended the reunion, as he holds the position of a vice chairman of the world organization. The sitting took place in the UN quarters.

The participants went to New York for the UN General Assembly.

"We have discussed the refugees issue, the climate change, the lack if economic growth in certain areas, the wars, which are the main source of many problems," said the leader of the Socialist International, George Papandreou.

The organization leaders also discussed about the Moldovan presidential race and the progress made by this country.

"Most Moldovans want a European way of life with freedom and prosperity. Signing the Association Agreement with the EU is a positive fact for Moldovans, but neither the relations with Russia shall be neglected," said former Belgian premier Elio Di Rupo.

The leaders of the Socialist International joining the most important center-left parties from the world back up Marian Lupu for president.

"My friend Marian Lupu is the most suitable politician who may assume responsibility for being Moldova’s president. I appreciate the fact that he can listen to people and does not make impulsive decisions. He’s a person the Moldovans can trust," said the leader of the Women’s Organization of the International, Ouafa Hajji.

"he’s a much respected colleague in our political family. I am very glad to see him enthusiastic. I wish him good luck with the elections and I hope to see my friend as Moldova’s president, next time we meet," said the International’s secretary, Luis Ayala.

"He’s a person fighting for a democratic and transparent society. I much respect his qualities and aspirations. Obviously the Moldova citizens are the ones to decide, but he has my vote," said George Papandreou.

PDM president says such reunions are a good opportunity for Moldova to make itself heard.

"They are a good opportunity to be aware with the international and regional trends. To present the situation from our country and to promote Moldova. I have received very strong supporting for our country’s European project," Marian Lupu maintained.

In New York, Marian Lupu met with ex-speaker of Finland, the Social-Democrat Eero Heinäluoma. He has said Moldova needs strong leaders to be able to continue the reforms and offer stability to citizens.

The Socialist International joins over 140 Socialist, Social-Democratic and labor parties from the entire world.