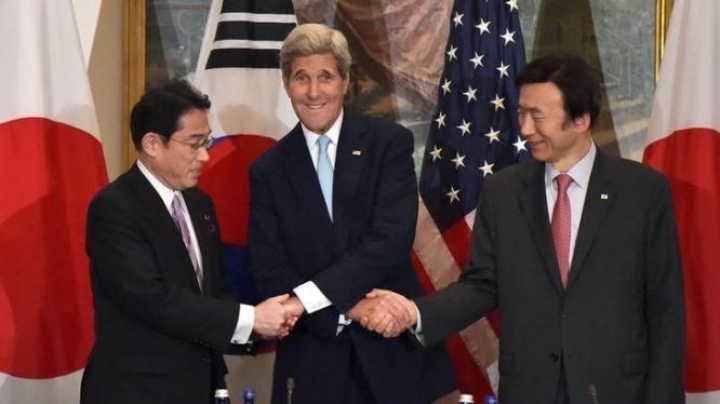 The three countries are pushing for tough new U.N. Security Council sanctions on North Korea after the isolated country on Friday conducted its fifth and largest nuclear test.

The blast was in defiance of U.N. sanctions that were tightened in March.

China, the North's chief ally, backed the March resolution but is more resistant to harsh new sanctions this time after the United States and South Korea decided to deploy a sophisticated anti-missile system in the South, which China adamantly opposes.

The United States wants China to do more, with U.S. Defence Secretary Ash Carter last week singling out the role he said China should play in curbing its neighbor.

North Korea has been testing nuclear weapons and ballistic missiles at an unprecedented rate this year under young leader Kim Jong Un.

China is North Korea's most important diplomatic and trade partner and refuses to cut the country off completely, fearing it could collapse.

Beijing's official People's Daily newspaper on Wednesday called the United States a troublemaker and said it has no right to lecture China about taking responsibility for reining in North Korea as tensions on the peninsula are a direct result of U.S. actions.

In a commentary, the ruling Communist Party's official paper said the United States was pretending it had nothing to do with the North Korea issue and was putting the blame on others.

"People have reason to doubt whether Washington is willing to make the effort to push the North Korea issue in the direction of a resolution," the paper said.

China and Russia have pushed for a resumption of six party talks on denuclearization in North Korea. The talks, which also involve Japan, South Korea and the United States, have been on hold since 2008.

Washington has said it is willing to negotiate with the North if it the country commits to denuclearization, which Pyongyang has refused to do.

Japanese Prime Minister Shinzo Abe will seek Cuba's help in responding to North Korea's nuclear and missile programs during a rare visit to Havana next week, a spokesman said.