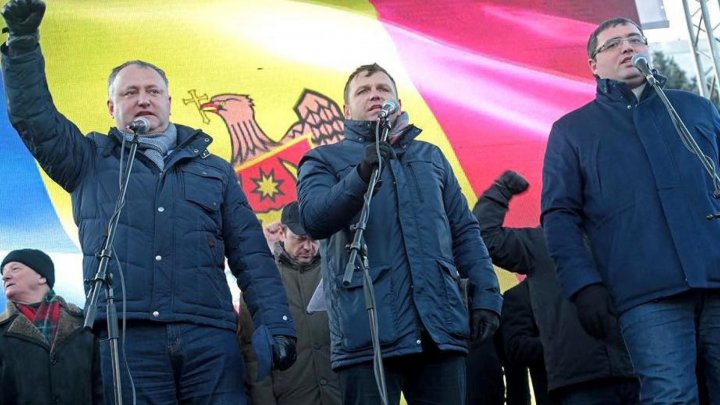 DA leader Andrei Nastase has sought Russia's help to get rid of Democratic Party leader Vlad Plahotniuc due to desire for power and revenge on the Democrat, writes Timpul.md.

On a show of television owned by his godfather Victor Țopa, Andrei Nastase announced to take a critical step in Russia.

"I want to request information regarding criminal files against V. Plahotniuc. I made this request on April 18 through Home secretary. I'm waiting the Plahotniuc's mafia and media to be blown up."

"I see that he keeps silent now. I also have another important document that will be presented another day. Let's intrigue V. Plahotniuc in the next show," continued Andrei Nastase.

In order to emphasize the intrigue, Nastase showed the "other document" of Val Butnaru, the show presenter and director of Țopa's television. His reaction was "Hmmm Interesting!".

Nastase reasoned that due to lack of time, he couldn't present a piece of paper. Then he carried on talking other subjects until the show ended. Actually he didn't wish people to know the papers received from Russia praised by this politician who declared pro-Romania and pro-Europe, writes Timpul.

Immediately after the show, journalists were contacted by some figures from ACUM who were irritated by Nastase's concealed jokes. They disclosed details of DA leader's plan including that "secret" paper.

According to ACUM members, Nastase wants to create a ACUM-PSRM alliance which relies on Moscow pressure upon Socialists. In other words, Nastase just wants to weapon Russia to fight against his enemy, Vlad Plahotniuc.

He concocted a request for information from Russia about Plahotniuc cases. As a pro-Europe politician, how naive are you to request official information about criminal cases from Russia? Nastase can be bad but can't be naive. He sent this request for another purpose, namely a Moscow's official invitation for discussion in order to cover up his real reason to visit Russia.

The resources also said that the paper waved by Nastase in the show was an invitation by Russian political forces to visit Moscow and discuss Laundromat issue (but Nastase said it was invitation to cooperate in the criminal case). Nastase hopes to receive different information to launch a war via "independent press" (including one of Victor Țopa) against Plahotniuc. He gradually relies on Russian justice.

The same resources from ACUM said that Nastase hoped to receive American and European support to convince Socialists to make anti-oligarch alliance. However, he is assured that Moscow is the key factor now.