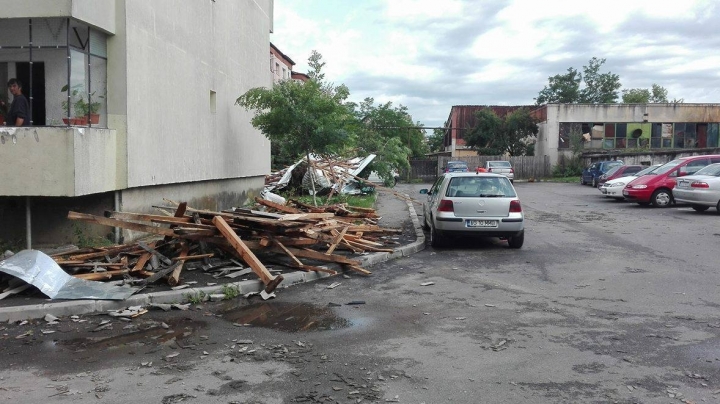 The bad weather had made victims in Romania. A two-year old girl from a village in Mures has died, after the car, in which she was together with her father, was hit by a tree put down by the storm. In Timis a man died thunderstruck, and another was injured and is in a critical state at the hospital. In Arad, the patients from the District Hospital were evacuated, and the doctors and nurses tried to take out the water from the flooded emergency ward with the buckets.

The chaos was also present in the streets. Flooded passageways, households and houses in which the water entered cars destroyed by the fallen trees and electricity poles. In only 15 minutes, the fire rescuers have received over 200 calls.

The storms also made havoc in Timis. In Periam, two men were thunderstruck. One of them did not survive, and the other was heavily injured. The two men were watching over sheep and hid from the storm under a tree. In other localities the households were flooded.

In Petrosani, during the night, 40 persons were rescued by the fire rescuers, after their houses were flooded. The 66 national road, transiting the city, was also flooded.

The problems did not disappear during the day, when it rained with hail of the size of a chicken egg. In order to protect their cars, people covered them with quilts, blankets or cardboard. The floods weren’t only in Petrosani, but also in Petrila, Lupeni and Vulcan.