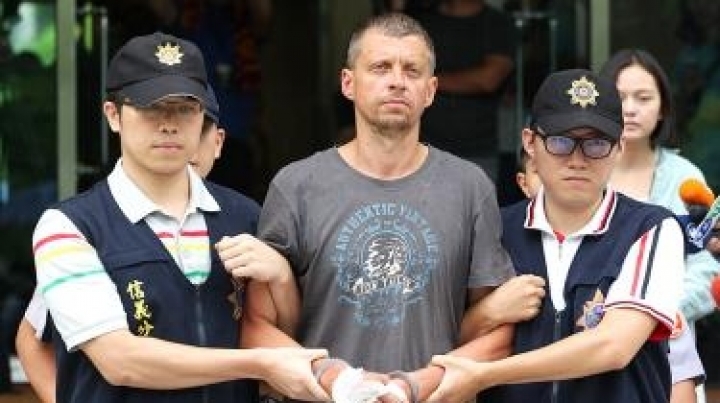 Latvian Andrejs Peregudovs, Niklae Penkov from Moldova and Mihail Colibaba from Romania are among 17 people suspected of involvement in the theft of more than NT$83 million (US$2.6 million) on July 9 and July 10.

Peregudovs, who was apprehended in Yilan County on Sunday, was not fully cooperative during questioning, CIB Taipei office squad leader Lee Wen-chang said.

Evidence collected so far points to him being a high-level member of the gang because he was the main person collecting the money stolen from the ATMs, taking it to hotel rooms and then to storage lockers in the basement of Taipei Railway Station, and telling other “money collectors” when and where to pick up the money, Lee said.

Police said Peregudovs has told them he cannot say too much because he fears the “Russian mafia will harm to my wife and kids,” and he has asked for a lawyer.

Peregudovs said that he was not a member of the Russian mafia, but was recruited to take part in the operation, which he agreed to do because he owed a debt of 3,000 euros (US$3,315), Lee said.

Peregudovs refused to undergo questioning yesterday morning, and asked for medical treatment for blisters on his toes he developed while biking in Yilan, Lee said, adding that the Latvian also said he required medication for a chronic ailment.

Although the investigators thought he was trying to play for time, he was taken to Taipei Medical University Hospital for an examination.

Investigators said that Peregudovs was willing to open up a bit after learning that he would not face the death penalty if convicted of involvement in the theft.

He allegedly placed suitcases filled with the stolen money in storage lockers and other locations, then used WhatsApp to send instructions on the locations and passwords for the lockers for other members of the gang to pick up, they said.

Peregudovs told investigators that left a suitcase containing about NT$20 million near a hiking trail in Taipei’s Neihu District, which was picked up later on.

However, he also said that the gang operated in closed cells, and he did not know the other suspects involved in the heist.

Penkov and Colibaba — who were arrested on Sunday at the Grand Victoria Hotel in Taipei’s Dazhi area — have also denied knowing other gang members.

They reportedly admitted to collecting the stolen money, acting according to instructions received via WhatsApp on their mobile phones, but police still want to know how and where they collected the NT$60.24 million found in their hotel room.