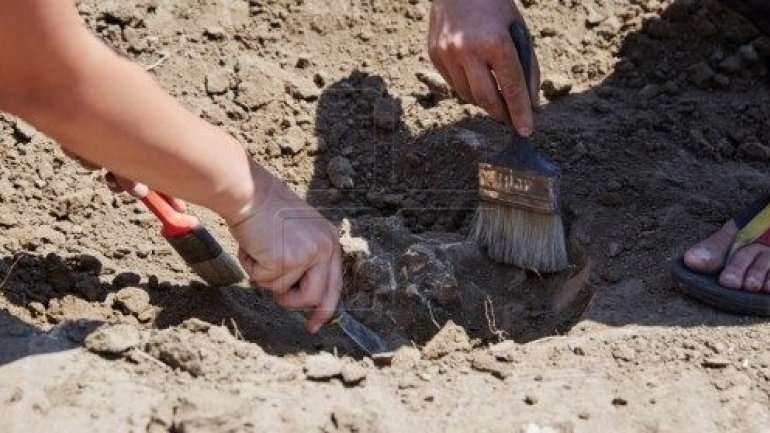 Archaeologists have discovered a few graves dating back, most likely, to middle ages, in Butuceni village, right in the center of Orheiul Vechi reservation.

The bones were located near the road, so tourists going to the monastery in Orheiul Vehi were in for a surprise. The discovery was made by a group of German students, accompanied by an associate professor from Moldova's State University.

The professor noticed a skull sticking out of the ground, thus, by the end of the day he gained the Ministry's approval and the works begun.

"We began digging and found the full skull, along with some remains of a second body. This work is scrupulous. We are cleaning the bones very slowly in order not to miss any small pieces that might come along with them, since every fragment is important, since all of them can give us a clue of their age" the professor of history and philosophy from the Moldova's State University, Sergiu Matveev, said.

No remains of wood was found, meaning, that the bodies were buried without coffins. The position of their hands tied to their body, not their chest, means that they date back to the 14th of 15th century. More details will be revealed after the remains will be analyzed by anthropologists.

"This graveyard is big, since only on this piece of field we were able to dig out 4 corpses.  At the moment we lack the proper equipment that could help us identify when the bones date back to" the chairman of the National Archaeology Agency, Vlad Vornic, said.

Tourists walking nearby remained impressed by what they have seen.

"It is rather strange to see skeletons at the edge of the road. Let us not forget that many people walk on this road, it would be best to take the bones to a museum".

"Perhaps, later on archaeologists will manage to find out more about the corpses. It is possible that those people were enemies".

Orheiul Vechi is a rich archaeological zone. Since the beginning of the year, in only four zones archaeological diggings were made. Until this moment were discovered Getae's houses, building and provision holes"