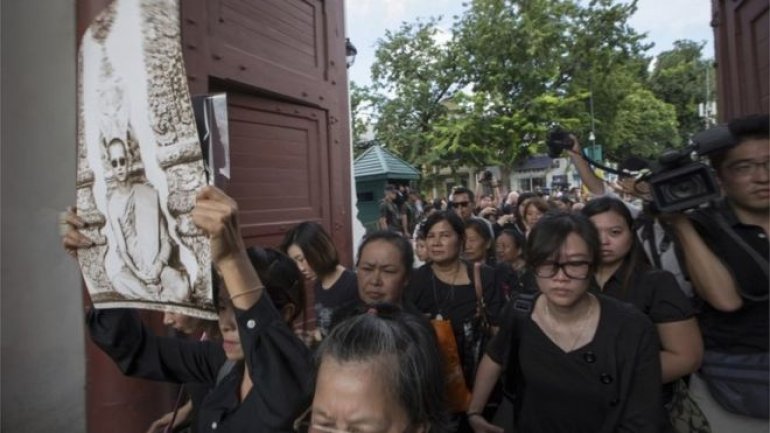 Large queues have formed at the Grand Palace in the Thai capital as mourners pay their respects to King Bhumibol Adulyadej, who died on Thursday, 13 October 2016, reports BBC.

Thousands, dressed in black, have been waiting to enter to sign a book of condolences at the palace in central Bangkok.

Free buses were laid on to transport mourners from rural areas.

A regent will stand in until the late king's son, Crown Prince Maha Vajiralongkorn, accedes to the throne.

Prince Vajiralongkorn has asked for a delay while he grieves for his father, who at 88 was the world's longest-reigning monarch.

The crown prince and Princess Maha Chakri Sirindhorn were among those who paid their respects at the palace.

On Friday, the king's body was transported in a convoy to the Temple of the Emerald Buddha in the Grand Palace from the hospital where he died. Cremation is not expected for several months.

Thousands of mourners lined the streets, many weeping, as the convoy passed. Millions more watched on TV.

Flags are to fly at half-mast for the next 30 days and official mourning will last a year.

People have been asked to wear black, and avoid "joyful events" during this period.

King Bhumibol earned the devotion of Thais for his efforts to help the rural poor and was also seen as a stabilizing figure in a country often wracked by political turmoil. Thailand remains under military rule following a coup in 2014.

But critics argued he had endorsed military takeovers and sometimes failed to speak out against human rights abuses.

The crown prince, who is 64, spends much of his time overseas and is much less well known to Thais.

Strict lese-majeste laws protect the most senior members of Thailand's royal family from insult or threat. Public discussion of the succession can be punishable by lengthy jail terms.