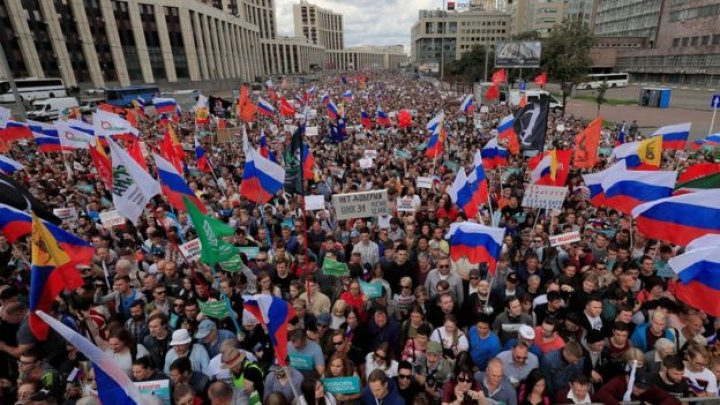 More than 20,000 protesters have gathered in Moscow demanding free and fair elections in the Russian capital.

Protesters are calling for opposition candidates to be allowed to register for the September polls.

The authorities have refused to register them despite each candidate gathering the minimum 5,000 signatures needed to be eligible to run, writes BBC.

Opposition leaders including the most prominent, Alexei Navalny, joined supporters at the rally.

Activists opposed to the government of President Vladimir Putin say the authorities have wrongly declared supporters' signatures invalid. Around 30 candidates were barred from running.

Speaking at the event Mr Navalny told protesters: "We will show them this is a dangerous game. We should fight for our candidates."

He vowed that there would be a bigger rally next week unless authorities register a number of candidates for the vote.

One candidate, Lyubov Sobol, has been on hunger strike for more than a week, demanding that she be allowed to run.

Organisers said on Facebook that they were protesting for a Russia "without bandits, fraudsters, swindlers and thieves".

Local authorities gave permission for the rally to take place.

Last week, police arrested dozens of protesters at another rally in defence of independent election candidates.

The protests come amid a drop in approval ratings for Mr Putin and anger over declining living standards and widespread corruption.