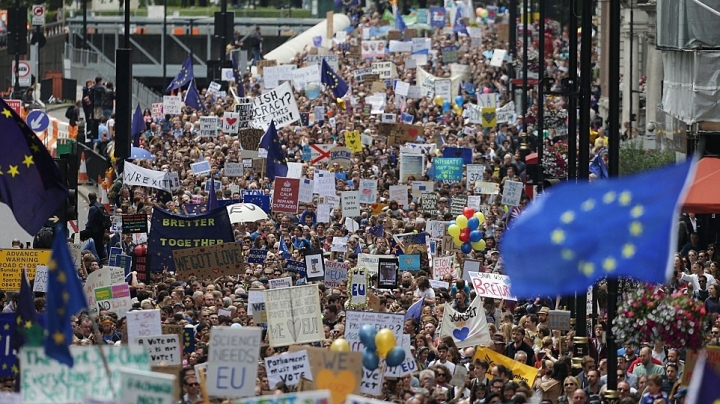 Thousands of people have gathered in central London again to protest against plans to leave the European Union, reports Daily Mail.

Demonstrators wearing EU flags as capes and with homemade banners saying 'Bremain' and 'We Love EU' gathered on the streets around Park Lane for the March for Europe rally.

Around 40,000 protesters are taking part in the event, which was organised on social media. They marched through the streets of London, from Park Lane to Parliament Square.

A smoke bomb was let off at Parliament Square and one person held a placard with a characateur mocking the candidate for Prime Minister, Michael Gove.

A cheer went up from the crowd at 11.30am as the marchers set off.

Most protestors were young adults, and many were draped in EU flags while others waved banners proclaiming slogans like 'I'm with EU' or simply 'Wrexit.'

They chanted 'what do we want to do? Stay in the EU,' as they set off for the Westminster political district.

One of the rally organisers, King's College graduate Kieran MacDermott, said: 'We can prevent Brexit by refusing to accept the referendum as the final say and take our finger off the self-destruct button.'

Parliament should have the final say on whether Britain should leave, he told the BBC.

The Metropolitan Police said there would be officers at the event to provide 'flexible and appropriate' policing.

The vote to leave the EU was deeply split. Voters in Scotland, Northern Ireland and the capital London backed remaining, while those that chose to leave were largely from less affluent areas in England and Wales.

But there was also a rough generational split.

The narrow victory has triggered anger in Britain among those who wanted to remain in the EU and more than four million people have signed a petition calling for a second referendum.

A poll for BBC's Newsnight programme found that 16 percent of voters think Britain will stay in the bloc, and 22 percent said they do not know if it will leave.

In the coming days, meanwhile, Conservative MPs will whittle down the party leadership candidates to two in a series of votes and the rivals will then tour the country to appeal to some 150,000 party members for their vote.

British media reported Saturday that energy minister and Brexit backer Angela Leadsom has become the favourite to face Theresa May on the ballot paper.

Gove, who torpedoed fellow anti-EU campaigner Boris Johnson's leadership hopes on Thursday, cast doubt on whether May could lead the country out of the EU after supporting a "Remain" vote.

However, Gove has also faced fierce criticism for turning on his one-time ally Johnson.