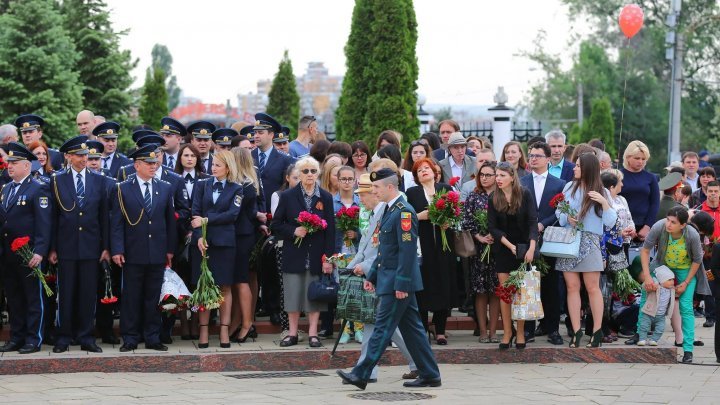 The events dedicated to Victory Day begun at 9:00 local time. Thousands of people gathered at the Eternitate Memorial Complex to lay flowers for the soldiers who lost their lives in the second world war, as well as to show their respect to the veterans who had to suffer.

Also this morning, President of the Parliament, Andrian Candu, President of Moldova, Igor Dodon and Prime Minister Pavel Filip laid flowers and commemorated fallen heroes from the Second World War. The officials later made some press declarations highlighting that it is an important day in Republic of Moldova's history, while young generation must never forget of it.

Officials thought of the people who had to live through the horrors of the Second World War, offering support to around 1 700 people. Therefore, people who participated in the war and those with disabilities received 10 000 lei, while people related to participants gained 500 lei. Spouses of fallen heroes who are no longer fit to work and have not remarried each received 1 000 lei from the state.

Zavroţchi spouses claim that they are proud of relatives who fought for peace.

"My father and three uncles were soldiers. They came back with disabilities and had a difficult life" Efim Zavroţchi said.

"We always remember them and what they have done for this country" Valentina Zavroţcaia said.

Another man said that he was born in 1941, when his father left for war. To this day he fondly remembers the stories his parent returned with.

"Among the deceased there is a monument of our family. I do not know which one it is for certain, but every year we come to lay flowers and bow" Andrei Babin said.

Fallen soldiers were also commemorated by the country's leaders, who laid flowers at both Eternitate Memorial Complex and Monument to the Victims of the Transnistrian war.

In his turn, Prime Minister Pavel Filip that people must learn from the past.

Around 270 000 Moldovans have lost their lives in the Second World War, while over 69 000 of them were never returned home.