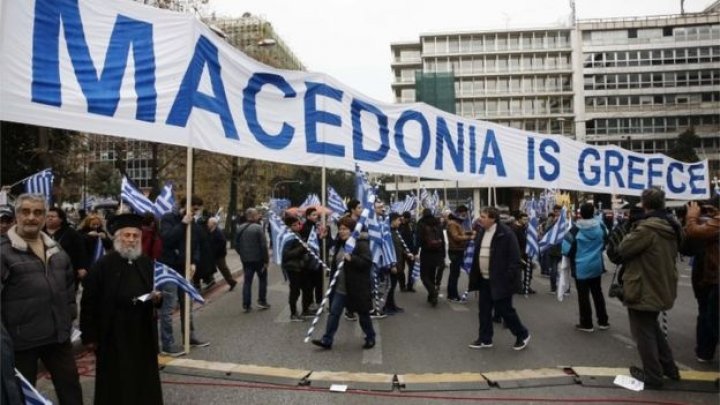 Hundreds of thousands of Greeks have taken to the streets of Athens in a protest about the decades-long dispute over the name Macedonia, wrote BBC.

Many Greeks object to the country of the same name calling itself Macedonia, saying it implies a territorial claim on Greece's northern Macedonia region.

Celebrated Zorba The Greek composer Mikis Theodorakis, 92, was among those addressing the crowds.

Anarchists daubed red paint over his home on Saturday but he was unfazed, declaring, "I am calm and ready."

Demonstrators carrying Greek flags chanted "hands off Macedonia" and "Macedonia is Greece" as they assembled in Syntagma Square outside parliament.

It is the second such protest in recent weeks - demonstrators rallied in Thessaloniki, the capital of the Macedonia region, on 21 January.

The dispute with Macedonia has festered since it gained independence from Yugoslavia in 1991 and has held up its bids to join Nato and the EU.

It is officially known as the Former Yugoslav Republic of Macedonia (FYROM) in organisations such as the UN.

Greece's left-wing Syriza government says the issue is a diplomatic obstacle it wants resolved and has proposed agreeing to a composite name for the country which would include the word Macedonia but ensure a clear differentiation from the Greek region.

But for many Greeks that would be a step too far.

Talks are under way at the United Nations but the Greek Foreign Minister Nikos Kotzias has received death threats since saying he expects the dispute to be resolved within months.

The Greek Orthodox Church backs the campaign to stop Macedonia using any variant of the name.