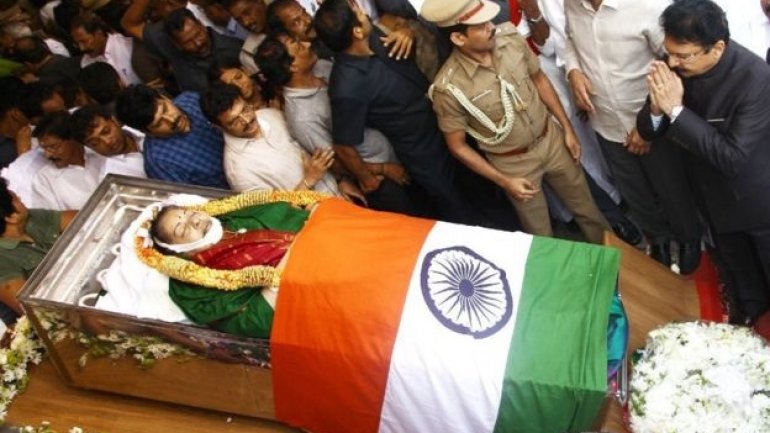 Tens of thousands of mourners are flocking to pay their respects to J Jayalalitha, one of India's most influential and colorful politicians, reports BBC.

The 68-year-old chief minister of the southern state of Tamil Nadu suffered a heart attack on Sunday night and died at 23:30 local time on Monday, Chennai's Apollo Hospital says.

Her body, draped in the Indian flag, is on display at a large public hall.

Prime Minister Narendra Modi was among those who visited to pay tribute.

Extra police have been deployed in the state amid fears of unrest.

The extreme devotion she inspires among her supporters, many of whom refer to her as "Amma" (mother) have led to concerns that they could resort to self-harm or violence.

Earlier reports of her death, which were swiftly withdrawn, prompted scuffles between police and her supporters outside the private hospital.

However, lines have been orderly so far, despite the visible emotion among the crowds who are queuing up to catch a final glimpse of Jayalalitha. Many are openly weeping while some are beating their heads and chests.

A seven-day period of mourning has been declared in Tamil Nadu. The central government in Delhi has announced that Tuesday will be a national holiday as a mark of respect and that she will be given a funeral with full state honors.

Prime Minister Narendra Modi is due to leave for Chennai to attend the funeral which is due to be held later this evening.

He has led tributes to the former film star who served as Tamil Nadu chief minister four times. She had been receiving treatment for months.

Jayalalitha is revered by many but seen by her critics as having created a cult of personality over the years.

Tributes began to pour in for Jayalalitha as soon as her death was confirmed by Apollo, which had been treating her since 22 September.

Jayalalitha's AIADMK party - which had earlier lowered the flag to half-mast before hoisting it up once more - also confirmed she had died, tweeting "our beloved leader, the Iron lady of India... Amma, is no more".

"RIP Jayalalitha" has been trending on Twitter, while Facebook is also filled with elegies for a woman who is widely respected for managing to hold her own in the male-dominated world of Tamil Nadu politics.