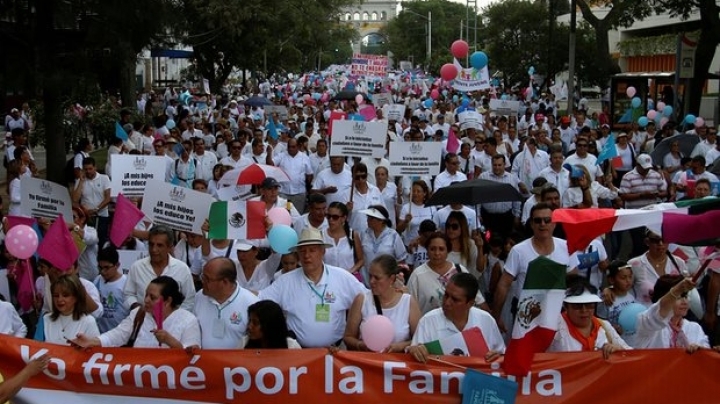 Tens of thousands of people across Mexico marched on Saturday to protest against gay marriage, challenging President Enrique Peña Nieto’s proposal to recognise same-sex marriage throughout the traditionally conservative country, reports The Guardian.

The marches were called by the National Front for the Family, a coalition of civil society organisations and various religious groups, and continued throughout the day from Mexico’s far north to the Yucatan peninsula.

Same-sex marriage is permitted in Mexico City, as well as in several states including Coahuila, Quintana Roo, Jalisco, Nayarit, Chihuahua and Sonora.

Peña Nieto has proposed changing the constitution to allow it nationally.

The embattled leader, who is grappling with discontent over a slowing economy, conflict-of-interest scandals, drug-gang violence and a visit by the US presidential hopeful Donald Trump that led to his finance minister’s ouster, has opened himself to criticism by asking lawmakers to debate gay marriage.

“It’s pulling on the noose,” said Victor Sanchez, a sociologist at Colegio de la Frontera Norte in Tijuana. “This comes as the government is showing a certain sort of fragility in other areas ... and they’re taking advantage of the moment.”

Peña Nieto says congress should debate and settle the issue of gay marriage.

By mid-day on Saturday, an estimated 40,000 people converged on the city of Querétaro in central Mexico, during a peaceful 3 to 4 kilometre march through the city, one of the largest gatherings in the country, Civil Protection officers said.

“I think it was something unprecedented, the awakening of the society of Querétaro in defence of the family,” said Jose Alcantara, an organiser with the National Front for the Family, adding the group had gathered more than 100,000 signatures against the proposal.

Ary Campos Martinez, a spokesperson for Civil Protection in the city of Puebla in central Mexico, said officers had originally expected roughly 5,000 marchers, but were working to monitor a crowd of approximately 12,000 by midday.

In the northern city of Monterrey, others came to a central plaza in counter-protest of the marches to sing and read poetry.

“It’s a discriminatory position and we hope it doesn’t have success,” said Jesus Gonzalez, 38, a human rights activist.

Mexico’s supreme court said last year that laws restricting marriage to a man and woman were unconstitutional. However, many state legislatures have not changed their statutes to comply, meaning couples must file legal challenges on a case-by-case basis to get married.

Gay marriage is still banned under local laws in many of Mexico’s 31 states.