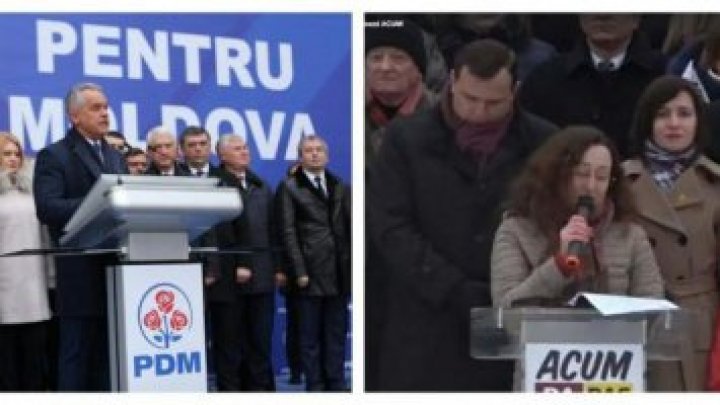 Messages with achievements, about people's needs, versus hateful accusations and incitement to violence. This's how PDM and PAS-PPDA bloc launched their election campaigns, writes Timpul.md

The PDM adopted slogan "More actions, less words" and their speeches presented in front of the party's headquarter focused on concrete accomplishments and projects designed to improve citizens' well-being.

"We're starting this electoral campaign with heads up, as we are talking facts, not just promises.

Together with PDM, government, councilors, local administration, mayors, we all achieved tangible results even in 2016, very few believed in our successes.

What the Democratic Party of Moldova in three years of government managed to do more than the previous governments", PDM chairman, head of the party's list, as well as candidate on constituency in Nisporeni, Vlad Plahotniuc said.

On the contrary, the PPDA leader, Andrei Năstase, delivered a speech with an aggressive rhetoric, full of destructive messages, at the limit of decency.

"Plahotniuc and Dodon made lots of damages to us, if we stay home, these ones will keep their bad things (...) We're the ones who can trigger the final and democratic assault against this regime. (...) Only by voting against this criminal government, we will take out country back", said Andrei Năstase.

Then, prime minister Pavel Filip, the candidate number two PDM list, made an eloquent speech, emphasizing that the government fulfilled its duty to citizens and now ask people to trust them in further reforms.

"We knew how to administer the public budget well and we could invest in supporting people and modernizing the country. We build foundation for welfare and it's growing in the next period. Our commitments are not just promises. This continuity means better life for people, for Moldova", declared Pavel Filip.

On the other hand, PAS leader Maia Sandu used blunt language at the limit of decency. She made impression that she was going to swear.

"We can no longer bear this injustice when a bunch of thugs rag on our citizens. Now their time was over", said Maia Sandu.

In his speech, Parliament Speaker Andrian Candu insisted that an election campaign means a competition of ideas, vision, facts, reality, a competition voters decide and choose who is the best in the end.

Oppositely, the PAS secretary-general, Igor Grosu, pointed another view of the election period.

"We are all determined to give a kick, you know where, to these thugs, these thieves," said one of Maia Sandu's deputies.