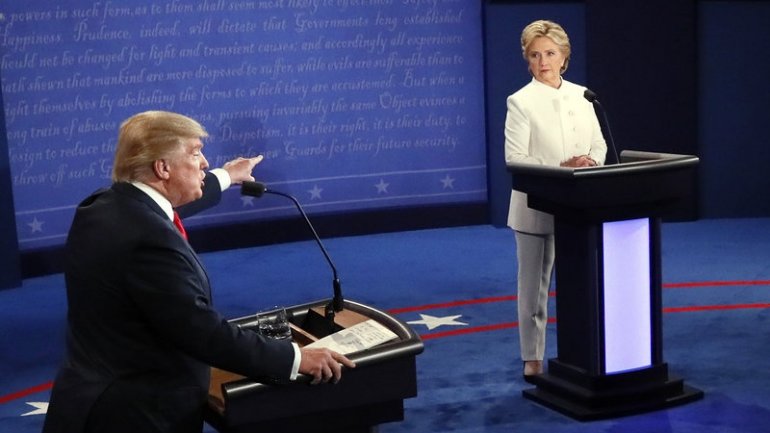 Donald Trump used the final presidential debate with Hillary Clinton to declare he would keep the country “in suspense” over whether he would accept the outcome of November’s election, stoking conspiracies over the legitimacy of the democratic process, reports The Guardian.

The Republican nominee’s refusal to endorse the results of the forthcoming election, unheard of in modern American history, capped a fractious debate in which he clashed with Clinton over abortion, gun rights, immigration and foreign policy.

In some of the most heated exchanges, Clinton accused Trump of being “a puppet”. Trump repeatedly interrupted his Democratic rival, at one point cutting her off mid-sentence with the line: “Such a nasty woman”.

However, it was Trump’s refusal to accept the outcome of an election he is currently projected to lose that will stand out from Wednesday night’s ill-tempered clash.

Trump’s comments directly contradicted those of his running-mate, Mike Pence,who just four days ago said he would “absolutely accept the result of the election”.

It also contradicted a promise Trump himself made last month, in the first presidential debate, when he was asked a near-identical question about whether he would accept the election result.

However on Wednesday Trump repeatedly refused to accept the election result and raised questions about voter registration inaccuracies.

Clinton described her rival’s refusal to accept the outcome of the election, which takes place in less than three weeks, as “horrifying”.

“Every time Donald thinks things are not going in his direction, he claims whatever it is is rigged against him,” said Clinton, adding that he has, at various times, accused the FBI, Republican primary process and judicial system of being corrupt.

“There was even a time when he didn’t get an Emmy for his TV program three years in a row and he started tweeting that the Emmys were rigged.”

“Should have gotten it!” Trump interjected.

People in the debate auditorium giggled at that interruption from the Republican nominee, one of several occasions when the audience could be heard breaking a rule that they should stay silent.

On another, there were sniggers when Trump insisted: “Nobody has more respect for women that I do, nobody.”

The businessman’s treatment of women was once again on trial in a debate.

The third debate was not as one-sided as the opening televised contest between the two candidates, in which Clinton was by most accounts declared the winner. Neither was it as personal as the second debate, in which the candidates clashed in some of the most brutal exchanges ever seen on a presidential stage.

However there was nothing in the last debate that seemed likely to alter the dynamics of a race in which Clinton has a six-point lead in an average of national polls – and an edge in almost all of the key battleground states needed to win the White House.

A CNN/ORC poll of debate watchers found 52% who thought Clinton emerged the victor, compared to 39% who said Trump won.

Embarrassingly for Trump, who has claimed victory in the wake of previous debates because he “won” instant – easily rigged – online polls, he was also declared the loser on an online survey conducted by the pro-Trump website Breitbart.com.

The bad blood between the candidates was unmistakable throughout their final head-to-head; pointedly, there was no handshake before or after the contest.

There are 20 days left before election day, but Wednesday’s debate was the last occasion both candidates will share a stage, and marked the final stretch in one of the most wildly unpredictable presidential races of modern times.

Trump's refusal Wednesday to accept the outcome of the election was a similarly unprecedented move, and perhaps his last throw of the dice. But it is a move the Clinton camp is likely to exploit in the closing weeks of its campaign.