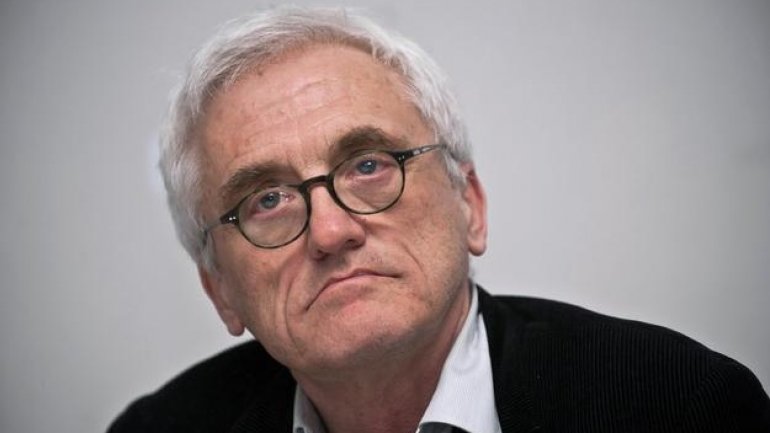 Jan Tomasz Gross, a famous historian who was accused of "publicly insulting the Polish nation [and] the Republic of Poland" with 3-year jail in 2015 but is still able to travel in Chisinau in these days and conducted several meetings on his book release.

His book named "Golden Harvest: Events at the Periphery of the Holocaust” has come out in Russian version and been available in Moldova.

Being asked about the decision of Polish Court on his words "Poles killed more Jews than Germans", he seemed extremely confident to cope with any issues:

"They [the Court] started the procedure but not any punishment has been imposed. Why that happened? Because they are totally crazy. I don't know what will happen so far but I'm ready to defend my mission."

"I mentioned that date in the interview not with the purpose of calling for any responsibility from nations but I just wanted people to be aware of the scale of the complicity during the Holocaust," said the historian sociologist Tomasz Gross.

Back in 2015, in an interview published in the German Die Welt, Gross said that during World War 2 "Poles killed more Jews than Germans".

Polish Foreign Ministry spokesman Marcin Wojciechowski described it as "historically untrue, harmful and insulting to Poland". He added that Poland's Ambassador to Germany addressed a letter of protest to the editors of Die Welt.

However, the author of Holocaust book claimed his substantive reasons.

“I told [the prosecutor] straight that I was not trying to insult the Polish nation. I was trying to raise awareness about the problem of refugees in Europe,” Gross told AP at that time.

According to the historian, at least hundred thousand Jews and no more thirty thousand Germans were killed by Poles in the Second World War.