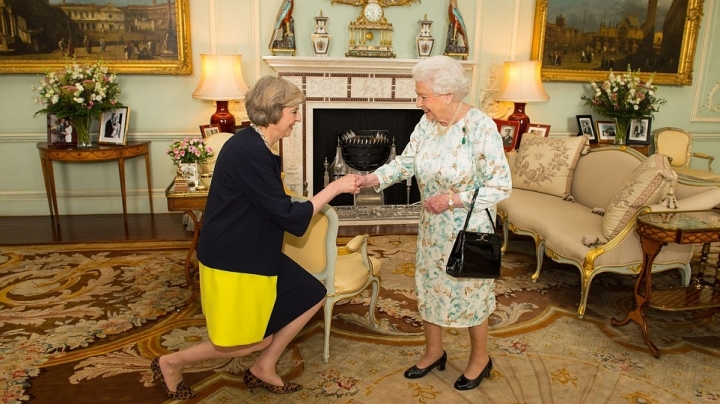 Theresa May has officially been installed as the new Prime Minister after seeing the Queen, reports Daily Mail.

Mrs May was invited to form a government by the monarch at Buckingham Palace after David Cameron officially tendered his resignation.

Flanked by wife Samantha and their children, he said: 'It's not been easy going and of course we have not got every decision right. But I do believe that today our country is much stronger,' he said.

Mr Cameron thanked his family for keeping him 'sane' during his time in office, and described Samantha as the 'love of my life'.

As the constitutional handover swung into effect, Mr Cameron went to see the Queen and formally told her he was quitting.

Mrs May is now taking her turn - entering as Home Secretary and emerge as the new PM.

Tory MPs hoping to win a place in Theresa May's first Cabinet showered their new leader with praise today, with one declaring: 'We have our Angela Merkel'.

Jeremy Hunt, the Health Secretary, compared Mrs May to the German Chancellor as he waits to find out if he will be promoted after spending three years with the tough health portfolio.

Mrs May is expected to make the most senior appointments of her Cabinet tonight.

But the skills minister Nick Boles has already resigned from the Government, jumping ship before Mrs May could sack him.

Mr Boles, who led Michael Gove's short-lived leadership campaign, was condemned for sending a text to supporters of Mrs May urging them to vote for the Justice Secretary to exclude Andrea Leadsom from getting through to the final two.

David Cameron treated his successor Theresa May to a private tour of his plush Downing Street flat last night as the incoming Prime Minister eyed up the Cameron family's luxury kitchen.

The incoming PM is expected to live in No 11, where the Camerons spent £25,000 to install a luxury new kitchen after arriving in 2010.

The Cameron family's kitchen is understood to be much better equipped and more spacious than their next door neighbours, with Nigella-standard units and surfaces.

But Mr Cameron didn't use the kitchen for one last time last night - instead he treated his staff by ordering one last curry as they frantically packed their bags to make way for the Mays.

Westminster's favourite curry house - Kennington Tandoori - tweeted a picture of their driver setting off with four big bags of curry to deliver their 'last supper' to No 10.