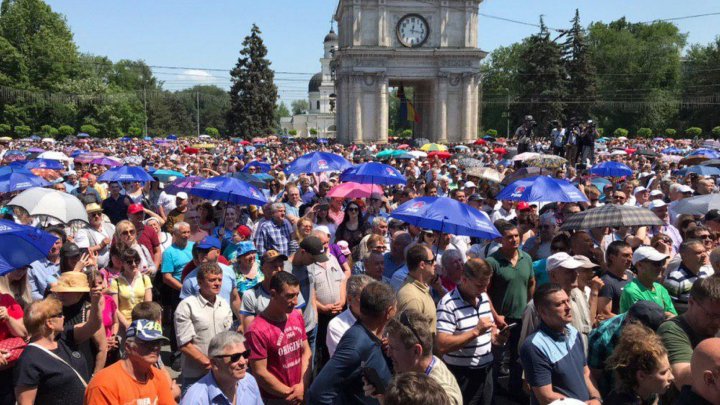 Over 30 000 people have gathered in PMAN at a peaceful protest, to defend Moldova's Constitutional order, firmly condemning any State betrayal act. All the demonstrators have voted the resolution regarding snap elections organizing.

'We, the Republic of Moldova people,
Those gathered in PMAN,
We see the shameful homeland betrayal by the citizen Igor Dodon,
Igor Dodon sold the state for millions of dollars and wants to knee and divide Moldova, to easily sell it on parts,
The state power was misused and has been done a coup d'état of a foreign interest.
In this context, we acknowledged the decision of Parliament dissolution and set a date for snap parliamentary election, when the people will come to freely elect a new power of Chisinau.
We, the dozens of thousands of people gathered in PMAN, firmly condemn any State betrayal act.
We firmly declare:
We are not selling our country!
Igor Dodon isn't a legitimate president anymore.
We are requesting his immediate resignation for state betrayal, illegal foreign financing of his party and state power usurpation.
Within these conditions, and counting the fact that the people hold the power, we request snap presidential elections in the same time as the snap parliamentary elections, on September 6, 2019, in conditions of maximum transparency and democratic rules', presents the resolution.
AFLĂ imediat Știrile Publika.MD. Intră pe Telegram