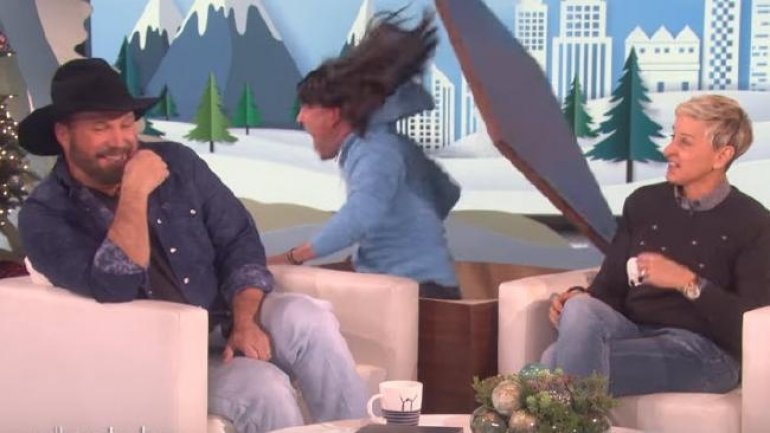 The comedian and host Ellen DeGeneres of The Ellen Show never passes up an opportunity to give a celeb a fright, often sending her guests into an on-set haunted house while filming their reactions.

Ellen pulled the old ‘crew member leaping out from hiding place’ trick in the middle of an interview with Garth Brooks— who barely flinched.

In fact, the crew member looked more scared, fleeing the set in quite a hurry after awkwardly tripping out of the box he’d been hiding in.

Once he’d scarpered, Brooks cleaned up in his wake, helpfully replacing the lid of the box and calmly taking his seat once more.

Ellen couldn’t stop laughing as she reflected on the half-cocked effort.

“Act like it never happened, that’s good. First of all: That was the WORST scare we’ve ever done. It didn’t work in any way. Oh my god that was pathetic!”

When Brooks asked how long the poor fellow had been hiding, Ellen quipped: “He hasn’t been in there that long, but we’re putting him back in there as punishment.”

To see the jump scare skip to around 3:40 of the interview below: