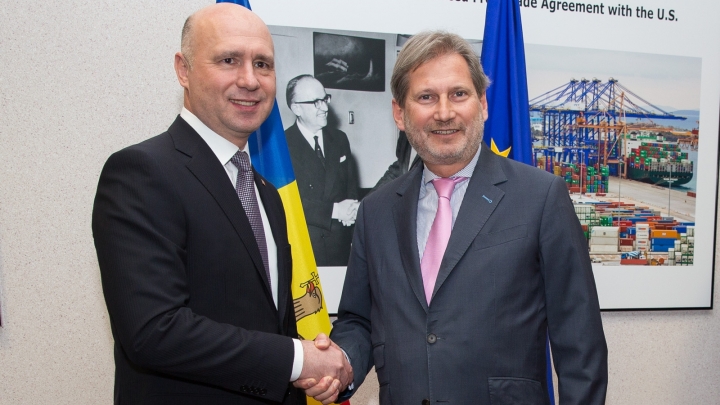 Prime Minister Pavel Filip today held a phone conversation with the Commissioner for European Neighborhood Policy and Enlargement Negotiations Johannes Hahn. The Premier thanked the official for the constant support provided to Moldova.

Referring to the latest evolutions in implementing the roadmap on the reform agenda, Pavel Filip noted that over 63 per cent of the set actions had been carried out so far. “We recorded significant achievements in carrying out the actions set in the roadmap focused on the justice reform, development of an attractive business environment, banking system consolidation, energy sector. Next week, a draft law on integrity is to be adopted in the parliament. We hope that all actions included in the roadmap should be carried out by late July”, he said.

Also, the Premier approached the dialogue with the International Monetary Fund and the next IMF mission, due on 5-15 July in Chisinau, in order to negotiate a new cooperation agreement with IMF.

In another context, Pavel Filip informed about the 7 June meeting in Bishkek with Russian Prime Minister Dmitry Medvedev, stressing Moldova’s interest to have good relations with Russia, and with respect to Moldova’s European path.

For his part, Johannes Hahn congratulated Pavel Filip for fulfillment of 2/3 of actions set in the roadmap and encouraged the Moldovan authorities to continue firmly act in order to implement the reforms and maintain the dialogue with civil society.

At the same time, the official accepted Pavel Filip’s invitation to pay a visit to Moldova by late July, a good opportunity to point out the achievements and to set priorities of cooperation between Moldova and EU for next stage.