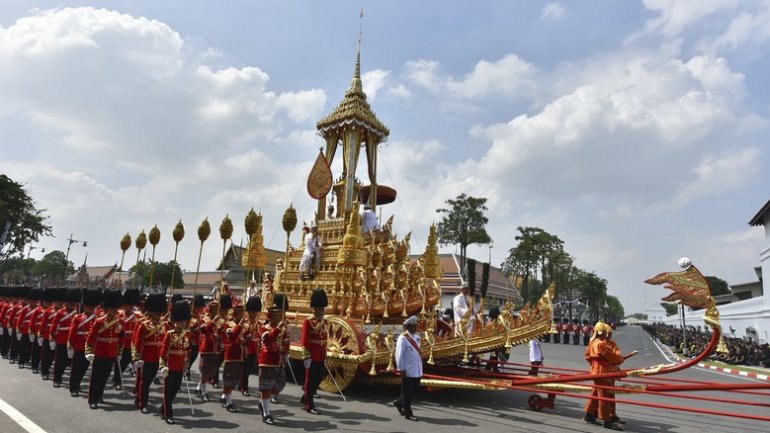 Thousands of Thais dressed in black prostrated themselves and wept as the funeral urn for their former king Bhumibol Adulyadej, a man revered as a demigod who became the world’s longest-reigning monarch, was carried by chariot to his cremation pyre.

Despite monsoon-season downpours punctuated with searing subtropical temperatures, many mourners have spent days in tents hoping to be close to the official send-off for the ninth head of the Chakri dynasty on Thursday.

Hotels had been booked up weeks before the special day, which was declared a national holiday, and authorities prepared for 250,000 people to arrive.

King Maha Vajiralongkorn, the son of the former sovereign, was to perform the service at the three-tiered crematorium, which represents Mount Meru, the centre of the Hindu and Buddhist universe where it is believed Thai royals return after death.

The country’s top artisans have spent 10 months constructing the spectacular 50-metre-tall, golden crematorium. Its structure of nine gilded spires was adorned with images from mythology and the life of the king, including statues of his two favourite dogs.

A day-long grand procession of royal chariots and palanquins included the great victory chariot, a four-wheeled, 13-tonne vehicle that transported the king’s body to the crematorium, pulled by more than 200 men.