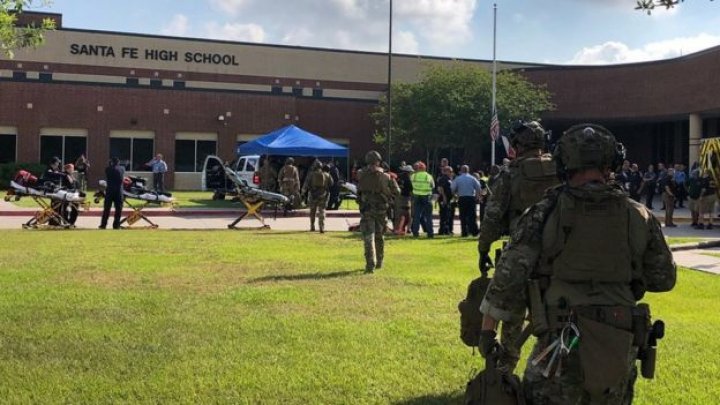 Between eight and 10 people have been killed in a shooting at a Texas high school, says a sheriff.

A student is in custody after the attack at the school, which is about 40 miles (65km) south of Houston.

The school district has confirmed people were injured in an "active shooter" incident as classes began.

The sheriff of Harris County, the largest county in Texas, said his officers were tackling a "multiple-casualty incident".

Sheriff Ed Gonzalez tweeted that one person was in custody and "a second one detained".

"An injured police officer is being treated, the extent of his injuries are unknown," he wrote.

Several students described hearing a fire alarm go off shortly before 08:00 local time. It is not clear how the alarm was activated.

One witness told KTRK-TV the shooting happened in her art class, and that one person shot was a girl.

"There was someone that walked in with a shotgun and started shooting," the student said, "and this girl got shot in the leg."

She said that she did not get a look at the shooter, because she ran to hide.

One 10th grader told networks she had an asthma attack while hiding in the woods.

News helicopters filmed students emptying their backpacks in front of armed officers in a field outside the school.

A bomb squad is currently on scene, and several helicopter ambulances have flown victims to a nearby hospital.

Federal officials with the Bureau of Alcohol, Tobacco, Firearms and Explosives (ATF) are helping the investigation.

First Lady Melania Trump tweeted from her hospital bed: "My heart goes out of Santa Fe and all of Texas today."

Shortly after the shooting began in the town of about 13,000 residents, a man carrying an American flag, wearing a Trump hat, and carrying a pistol on his hip approached news cameras.

The man, who did not give his name, said his goal was to "get to the school. Make America great again."

Another man then told reporters "we need prayers".

"This idiot is walking down the street with a damned pistol on his side where we just had kids get shot," he said referring to the other man.

"I'm a guns rights person. I have guns. But this idiot is walking down here and saying he needs to make America great again. That's is not what America we needs."