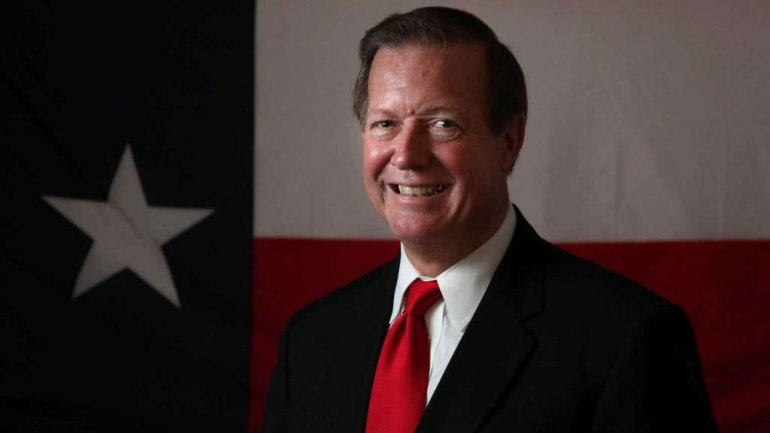 "Russia has its sights set on the front line states of Eastern Europe," the Texas Republican said as he unveiled his non-binding resolution last month. "One such particularly vulnerable state is the Republic of Moldova."

Weber's initiative to hold the Moldovan government's feet to the fire, however, has dragged him into a murky saga of warring political factions competing Sunday in that nation's first direct presidential election since 1996.

Among those targeted for possible sanctions in Weber's resolution is a top official in Moldova's pro-Western Democratic Party, Andrian Candu, who recently met with U.S. State Department officials and House Speaker Paul Ryan to mark the 25th anniversary of Moldovan independence.

Some critics, including Candu, say Weber misfired after meeting with two Moldovan critics of the nation's ruling Democratic party, one of them a competing candidate for president at the time.

Weber declined an interview request, but his critics say the resolution, which has no chance of passing before Sunday's election, now is fodder for opponents of the embattled Democratic Party of Moldova. Rocked by a billion-dollar banking corruption scandal in 2014, the party still enjoys an international image of trying to peel the nation away from Vladimir Putin's Russia.

In an echo of the U.S. presidential election, both the government and the opposition are alleging Russian interference in Moldova's presidential race, which has now ensnared Weber, a two-term congressman from Pearland.

"The authors of the draft resolution do not seem to understand or know the real case of Moldova," Candu told Moldova's Europa Libera web site earlier this month. He contends that the resolution, sponsored by Weber and Arizona Republican Trent Franks, was aimed not at Congress but at the Moldovan public.

Candu also claims that the resolution was the work of U.S.-based lobbyists working with Andrei Nastase, a candidate for president until he withdrew Oct. 15 to support another opposition group known as "Action and Solidarity."

Nastase met with Weber last month. That came after a meeting in July with Mihail Gofman, a former official in Moldova's National Anti-Corruption Center. Currently on the outs with the Moldovan government, Gofman remains in the United States and says he has been in contact with U.S. law enforcement, including officials from the FBI. He styles himself as a non-political whistleblower, but according to Moldova's Publika.md web site, he is being sought for questioning by Moldovan prosecutors.

Gofman, in an interview Wednesday, denied any wrongdoing and said he will return to Moldova once he has "delivered the information to everyone who needs to know what happened" in the bank scandal. "Inside Moldova, no one is truly interested in investigating the crime of the century." Whether the married father or three faces repercussions, he said, "is an open question."

Gofman, speaking through an interpreter, said he is acting on his own, though it is clear that both factions in the Moldovan election battle are getting lobbying help in Washington.

That suggests both the importance of Washington's goodwill and its blessing for a $179 million loan package pending before the International Monetary Fund.

Weber has been a central figure in that debate as well, firing off a letter to IMF Managing Director Christine Lagarde this month seeking assurances that the money does not "serve to bail out a government whose top officials were involved in defrauding the Moldovan people of over $1 billion."

In his speech rolling out the Moldova resolution in the House, Weber, a member of the House Foreign Affairs Committee, echoed Gofman's phrase about "the crime of the century."

So far, at least three people have faced trial, arrest, or imprisonment for their involvement.

That is one reason why the Obama administration has backed the pending loan. "We will continue to encourage and support reform in Moldova to ensure the long-term economic health of the country," the State Department said in a statement to the Chronicle.

A recent poll released by the International Republican Institute shows that a leading contender in Sunday's multi-party presidential race is the Socialist Party's Igor Dodon, a former communist who favors closer ties to Moscow.

That has given pause to some U.S. analysts who want to minimize Russian influence in Moldova, one of Europe's poorest countries, long suspected to be a hub for Russian money-laundering.

Candu has accused the Russians of financing opposition parties and backing anti-government protests that have plunged the nation into turmoil in the past year.

Plahotniuc is a major financier and vice-chairman of Moldova's ruling Democratic Party. He has not been charged or arrested, which Gofman attributed to his enormous influence over the government.

Gofman, in turn, has come under suspicion of money laundering, according to a Moldovan press that Gofman said largely is controlled by Plahotniuc. Some of Gofman's critics also point out that he was the deputy in charge of combatting financial crimes when the funds were funneled out of the country's central reserves.

That's one reason why some U.S. foreign policy analysts question Gofman's role in Weber's resolution, which takes aim at nearly a dozen high-ranking Moldovan officials, a veritable Who's Who of the country's power structure.

"It is clearly written by somebody who is pro-Russian," said Richard Grenell, a former spokesman for four U.S. ambassadors to the United Nations, including John Bolton. "He's trying to attack the only pro-European group in Moldova."

Grenell also argued that withholding money from Moldova could push the nation back into Russian hands.

"Randy Weber does not know what he is doing," he said. "It sounds like he just stepped in it, that some lobbyist got to him."

"Moldova is a country that hangs in the balance between democracy and Russian aggression," Weber said. "It is in the United States' best interests to help countries who seek free and fair elections."