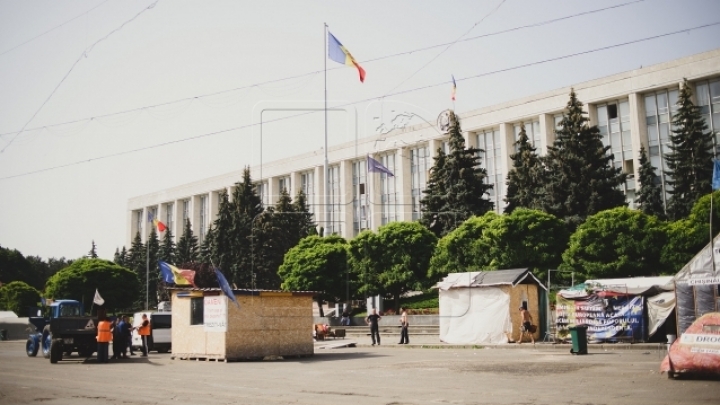 (UPDATE 12:49) "Plahotniuc's (TV) holding, every time, at every protesting meeting, at every action of ours, invented bombs, invented bats, invented corpses, invented whatever you want,"  stated Andrei Năstase.

(UPDATE 12:05) The leader of the Dignity and Truth Party of the Topa gangsters, Andrei Năstase, has said the bats found by the police are but inventions.

A news conference convened to comment on the tents uninstallation has been transformed into a party rally, as electoral slogans have been heard for about an hour.

The brother of the DA leader, Vasile Năstase, has recognized the role of the tents had been merely electoral and they had accomplsihed their mission.

Yesterday, the Supreme Court of Justice rejected the appeal of the DA Party's lawyers, who questioned the decision of the Ialoveni court on dismantling the tents.

The judges obliged the protesters backed by the Topa fugitive gangsters to remove their compounds from the Square.

(10:31) The Chisinau municipal authorities dismantled the tents from the Great National Assembly Square this morning. The police ensured the public order and the few protesters there only managed to utter some threats.

The uninstallation started at 07:00. The law-enforcers have found two bats in the tents, as a protesters has threatened with violence to be organized on the Independence Day (27 August,)

The tents were taken off within less than one hour, as trucks of the municipal Cleaning Enterprise washed over the square.

Last month a court ruled for the tents to be dismantled, following a request by the Chisinau City Hall.

Later, the Court of Appeal upheld the ruling regarding the compounds of those few protesters of the Dignity and Truth Platform backed by the Ţopa fugitive gangsters.

People from Chisinau – annoyed with the downtown tents – have repeatedly demanded their dismantlement, on reason they mar Chişinău’s image.

Yesterday, veterans having fought in the Nistru war, stated the country’s main square must be a place for patriotic events, not of events dividing society.

The tents in front of the Government building were installed last fall.