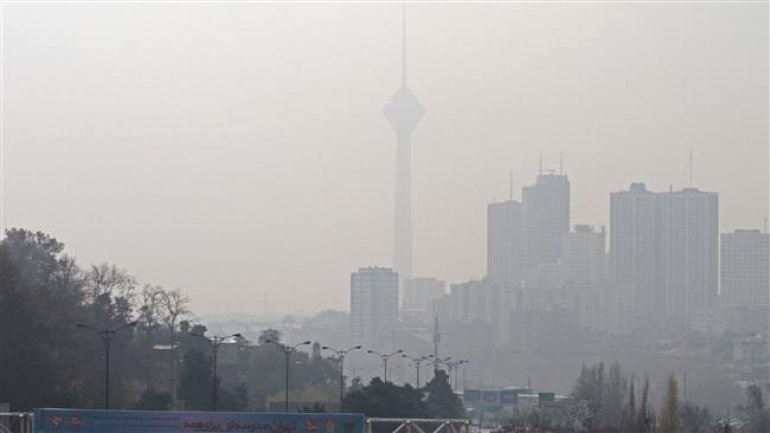 At this time of the year, citizens of Tehran are accustomed to a thick curtain of fog that falls across the city, veiling everything from the 435 meter-tall Milad tower to the nearby Alborz mountains.

This week, however, the blanket of smog smothering the Iranian capital has been blamed for a string of deaths and prompted unprecedented emergency measures by the city’s authorities, reports The Guardian.

Habib Kashani, a member of Tehran’s municipal council, said on Tuesday that pollution in Tehran had led to the death of 412 citizens in the past 23 days, according to the state news agency, Irna.

City authorities announced that all schools would be closed on Wednesday.

The concentration of ultra-fine airborne particles (known as PM2.5) reached more than 150 this week, setting a new record. These particles of less than 2.5 micrometers in diameter can penetrate the lungs and pass into the bloodstream and have been linked to increased rates of chronic bronchitis, lung cancer and heart disease.

Irna reported that on four of the past six days, air quality reached dangerous levels for people suffering from respiratory diseases, and on two days it was dangerous for everyone.

PM2.5 levels are seen as the best measure of the impact of air pollution on health. The new World Health Organisation database of worldwide air pollution measures, released in May, put the Iranian city of Zabol, on the eastern border with Afghanistan, as the world’s most polluted city, based on PM2.5.

Pollution is a perennial problem in Tehran, which is surrounded by mountains and has little wind to disperse the smog. Millions of cars throng the city’s congested streets, and locally refined petrol has also been blamed as a key polluting factor.

The issue dominated newspaper front pages in Tehran on Tuesday. Ebtekar daily published a large picture of a smog-cloaked Tehran, carrying the headline “My city has been lost”, and called for a reduction in the number of cars.

“Every day 3 million inner city commutes by the metro and 4 million such journeys by taxi have not resolved the capital’s air pollution crisis,” it said. According to Ebtekar, at least 1.25 million obsolete cars were still in use in Tehran and 60% of cars in the city normally carry just one person.

The reformist daily Etemaad published a black column on its front page saying that “We are all to blame”. It said Tehran was suffocating because “we [the media] are not able to hold the authorities accountable”, “you are not switching off your cars” and “they [officials] are only capable of closing schools”.