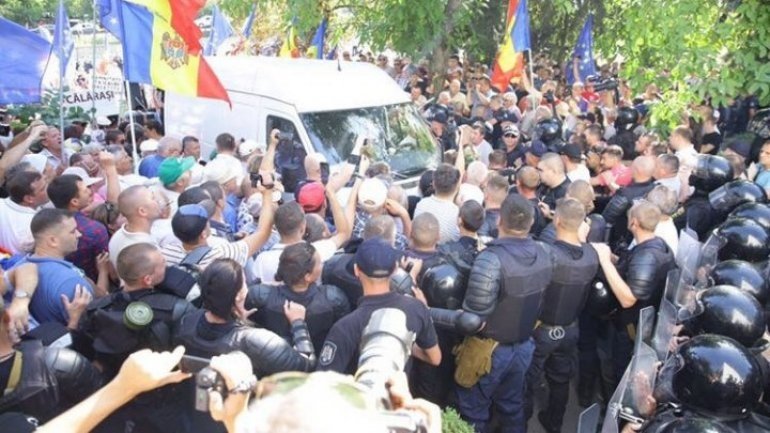 Stereo technique used in the protests on September 17 organized by DA and PAS, were brought from Culture House of Cricova.

Mayor of Cricova, Valentin Guțan, came to the Center Police Inspectorate on Tuesday to retrieve all the confiscated stuff.

"I took everything belonging to the Culture House, an amplifier and a mixer. I will clarify how these things brought to the protest." declared Cricova Mayor, Valentin Guțan.

After protest on September 17, the Mayor of Cricova filed a complaint to Râşcani Police Inspectorate about lost technique. However, he denied this later.

Timpul.md, in fact, obtained an audio record confirming the mayor notified the police.

According to the same source, attempts were made to cover the case. The Mayor has changed his statements after DA Platformer activist Sergiu Cebotari, who was responsible for the sound in protest, talked with him personally or through other party colleagues:

"Ian, I'm going to call Moţpan and talk to the mayor." "You do not have to call the mayor." "What are you calling for?" "Take these people all the way. to get back to Cricova until we can discuss it again. "

The technique had to be returned on Sunday evening, unfortunately the bus carrying technique was confiscated as its driver had attempted to enter the crowd during protest in front of Moldova 1 headquarter.

The investigation by Timpul.md shows that the DA activist Sergiu Cebotari was helped to take the stereo stuff from Cricova by an employee of the Culture House and his sister, Tatiana.

The case is being investigated by the Police Inspectorate in Râşcani.