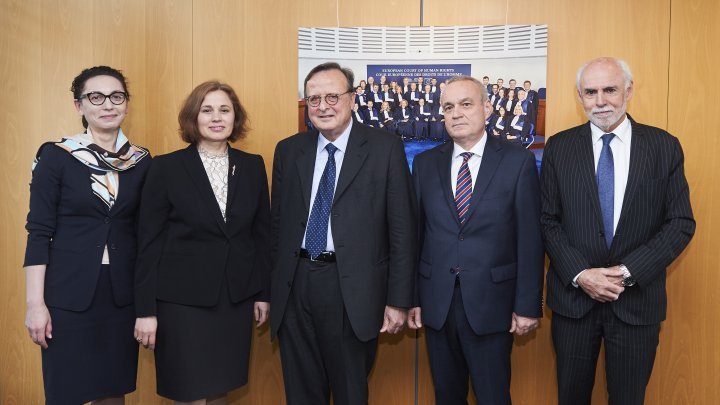 The talks between the two officials focused on respect for human rights in the Republic of Moldova, reforms in the judiciary sector in our country, the implementation of the judgments of the Court in Strasbourg and measures to prevent human rights violations.

The Minister of Justice informed the President of the European Court of Justice about the Government's efforts to implement the judicial reform, improve the conditions of detention and establish a compensatory mechanism for insufficient detention conditions.

Also, the question of the preventive arrest has also been discussed, which remains a sensitive issue due to the frequent convictions of the Republic of Moldova under Article 5 of the Convention. In this respect, Minister Iftodi informed the President of the Court of the measures taken by the Executive that will lead to the exclusion of arbitrary or unjustified arrest.

President Raimondi informed that Protocol No 16 would come into force on 1 August 2018. This will increase dialogue and improve the implementation of the Convention at national level. Please note that Protocol No 16 provides for the possibility for national higher courts to request the ECtHR's opinion on legal issues related to the interpretation of the Convention and its Protocols. The President of the Strasbourg Court has expressed the hope that this instrument will become more attractive to States Parties as soon as it starts to apply.

Minister Iftodi expressed the desire of national authorities to protect human rights effectively and promptly at all levels and in any circumstances.

In addition, Victoria Iftodi said she supports any action that would strengthen the role of the ECtHR and ensure the unconditional execution of its rulings. In the same context, the Minister emphasized the need to support the efforts made by our country in the execution of the European Court's rulings in cases originating from the Transnistrian region, especially in the area of ensuring the functioning of Transnistrian- of the Republic of Moldova.

In his turn, the President of the European Court declared that he would continue to support the Republic of Moldova, appreciating the efforts of our country as encouraging and highlighting the willingness of the Moldovan Government to improve the human rights situation. President Raimondi also expressed his satisfaction with the professional qualities and the work done by the Moldovan lawyers seconded to the ECtHR.
AFLĂ imediat Știrile Publika.MD. Intră pe Telegram