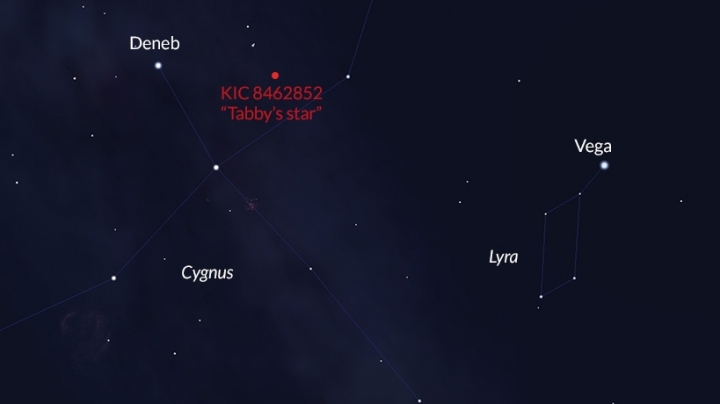 A star that made headlines for its bizarre behavior has got one more mystery for astronomers to ponder.

Tabby’s star has been inexplicably flickering and fading. The Kepler Space Telescope caught two dramatic drops in light — by up to 22 percent — spaced nearly two years apart. Photographs from other telescopes dating back to 1890 show that the star also faded by roughly 20 percent over much of the last century. Possible explanations for the behavior range from mundane comet swarms to fantastical alien engineering projects .

A new analysis of data from Kepler, NASA’s premier planet hunter, shows that Tabby’s star steadily darkened throughout the telescope’s primary four-year mission. That’s in addition to the abrupt flickers already seen during the same time period. Over the first 1,100 days, the star dimmed by nearly 1 percent. Then the light dropped another 2.5 percent over the following six months before leveling off during the mission’s final 200 days.

Astronomers Benjamin Montet of Caltech and Josh Simon of the Observatories of the Carnegie Institution of Washington in Pasadena, Calif., report the findings online August 4 at arXiv.org.

The new data support a previous claim that the star faded between 1890 and 1989, a claim that some researchers questioned. “It’s just getting stranger,” says Jason Wright, an astronomer at Penn State University. “This is a third way in which the star is weird. Not only is it getting dimmer, it’s doing so at different rates.”