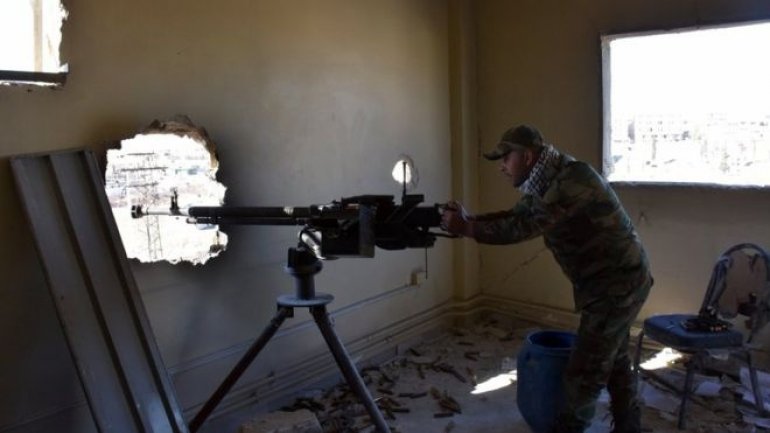 They say the army and its allies had "fully recaptured" Jabal Badro, a day after seizing Hanano district.

The capture of the two neighboring districts has increased the chances of cutting off the northern parts of eastern Aleppo from the southern part.

Hundreds of civilians have been fleeing rebel-held areas as the army's advance has gained momentum.

Russian news agencies said some 900 civilians - including 119 children - had left Jabal Badro alone before the troops moved in.

One man left Hanano on Saturday, telling Reuters news agency it was "because of the bombardment from the Syrian army during the advance, and the chlorine gas".

He was waiting with his wife, mother and three children at a minibus stop, hoping to travel on to the west of the city.

This is the biggest blow so far to rebels in Aleppo. They seem to be losing ground quickly to pro-government forces attacking them from the east.

The loss of Hanano was a strategic victory for President Assad's forces - but also a symbolic one as it was the first district rebels seized in Aleppo in 2012.

The government's aim seems to be to cut the rebel-held area in two at its narrowest point. There is heavy fighting in the Sakhour district. If the rebels lose it, the army will have achieved this objective.

The fighting has set off a wave of civilians seeking refuge not only in other rebel areas, but also on the government side.

Some 275,000 people are believed to remain in eastern Aleppo, where food and medical supplies have all but run out.

The Syrian army's offensive to retake eastern Aleppo is now into its 13th day.

Around 219 civilians, including 27 children, have been killed in the assault so far, the UK-based Syrian Observatory for Human Rights says.

Retaking all of Aleppo would be a major victory for Syrian President Bashar al-Assad after five years of conflict.

Once Syria's commercial and industrial hub, Aleppo has been divided roughly in two since 2012, with the government controlling the west and rebels the east.

In the past year, Syrian troops have broken the deadlock with the help of Iranian-backed militias and Russian air strikes.

Russia says its air force is active in other parts of the country, but not operating over Aleppo.