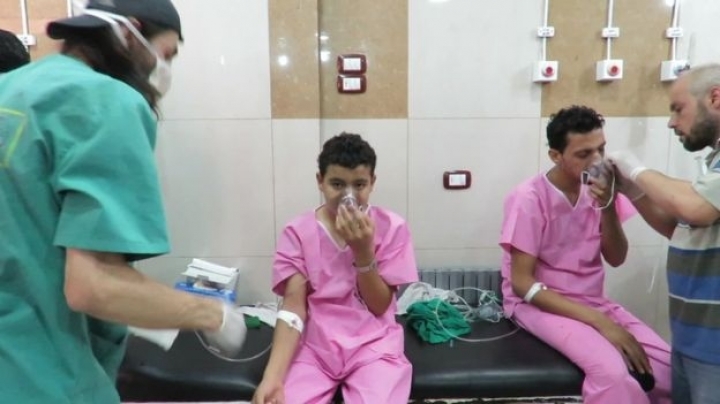 Syrian government forces have been accused of dropping barrel bombs containing chlorine from helicopters on a suburb of Aleppo, injuring 80 people, reports BBC.

The reports could not be independently verified. A UN-led inquiry concluded last month the that government had used chlorine on at least two occasions.

It comes as Syrian opposition leaders prepare to meet in London on Wednesday to launch a new plan for a political transition to try to end the five-year civil war.

Foreign ministers from the Friends of Syria group of countries, which have supported the rebellion against President Bashar al-Assad, will also attend.

Saudi Foreign Minister Adel al-Jubeir told the BBC that he still believed in a political solution to the conflict, and that Mr Assad was not in a "position of advantage or victory", despite his forces' recent advances.

A volunteer emergency response worker from the Syria Civil Defence said he had reached the scene of the Aleppo attack on Tuesday shortly after a helicopter had dropped barrels containing what he said were four chlorine cylinders.

The Syria Civil Defence, an organisation that operates in rebel-held areas and is also known as the "White Helmets", posted video on its Facebook page showing distressed children using oxygen masks to breathe.

Chlorine is a common industrial chemical, but its use in weapons is banned by the Chemical Weapons Convention. If high concentrations of the chemical enter the lungs it can cause death.

Opposition activists and medics accused the government of another chlorine attack in Aleppo in August.