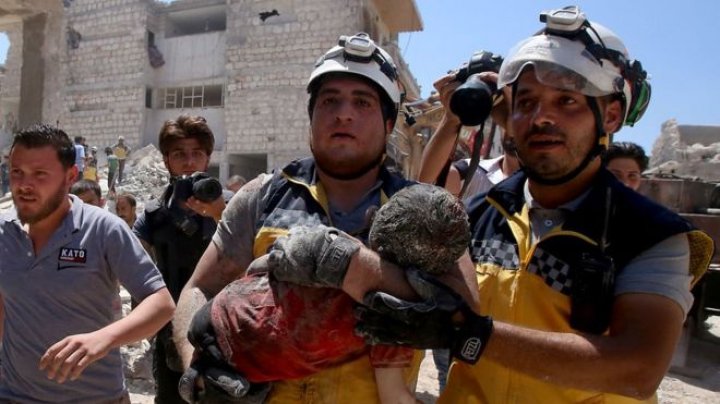 More than 100 people, including 26 children, have died in government attacks on hospitals, schools, markets and bakeries in the last 10 days, the UN's human rights chief says.

Michelle Bachelet said the deaths were part of a "relentless campaign of air strikes by the government and its allies", which include Russia.

The civilian targets, she added, were unlikely to have all been accidental.

And yet the reports were being met with "apparent international indifference".

Speaking to reporters, Ms Bachelet hit out at the "failure of leadership by the world's most powerful nations".

The rising death toll in the rebel-held region of Idlib, she said, had been met with a "collective shrug". The conflict had fallen off the international radar while the UN Security Council was paralysed, she added.

She also warned those carrying out the attacks could be charged with war crimes.

"It seems highly unlikely, given the persistent pattern of such attacks, that they are all being hit by accident," Ms Bachelet said.

"Intentional attacks against civilians are war crimes, and those who have ordered them or carried them out are criminally responsible for their actions."

Idlib, along with northern Hama and western Aleppo province, is the last opposition stronghold in Syria after eight years of civil war, writes BBC.

It is supposedly covered by a truce brokered in September by Russia and opposition-backer Turkey that spared the 2.7 million civilians living there from a major government offensive.

Last week, the UN said more than 350 civilians had been killed and 330,000 forced to flee their homes since fighting escalated on 29 April.

However, this figure has now been revised, with 103 extra deaths in the last 10 days alone. The estimate for the number displaced stands at more than 400,000.

The government - which is backed by the Russian air force - said the increase in attacks was due to what they said were repeated truce violations by jihadists linked to al-Qaeda who dominate the opposition stronghold.

Russia has denied reports earlier this week that it carried out airstrikes on a market and residential areas which left at least 31 civilians dead.