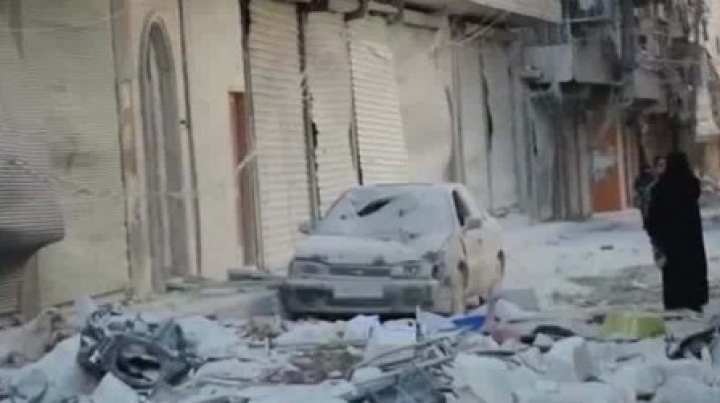 At least seven people - six of them children - were killed in a barrel bombing of opposition-held eastern Aleppo Sunday, an activist group reported, as the Syrian government continues its furious offensive in the wake of a collapsed ceasefire, reports CNN.

The barrel bombs, launched from helicopters, struck the city's Bustan al-Pasha neighborhood, according to the Aleppo Media Center, an opposition-affiliated group of activists which works to document the conflict.

The United Nations Security Council is to meet Sunday to discuss the devastating Syrian government offensive on Aleppo that has raged since a shaky ceasefire deal fell apart last week.

The session, to begin at 11 a.m. ET, was requested by the United States, Britain and France in the wake of the regime's military push to retake rebel-held parts of eastern Aleppo in recent days, a UN source confirmed to CNN.

The opposition says the violence has been even more intense than before the ceasefire took hold.

Hundreds of airstrikes have pummeled the city since the Syrian government, backed by Russia, announced a renewed, "comprehensive" offensive on Thursday following the collapse of the short-lived ceasefire. The offensive, involving ground troops as well as air power, has targeted rebel positions across the country, inflicting "heavy losses" on them, the state-run Syrian Arab News Agency (SANA) reported.

Residents in the opposition-held east of Aleppo, where more than 250,000 civilians are besieged by government forces, reported ongoing barrel bomb attacks Sunday.

On Saturday, Syrian government troops and supporting militia made their first major ground advance of the assault on Aleppo, seizing control of the Handarat Palestinian refugee camp on the city's northeastern outskirts, while warplanes bombarded the opposition-held east, according to state-run SANA.

Rebels then launched a counter-offensive to try to retake the area, according to the UK-based Syrian Observatory for Human Rights (SOHR). There were conflicting reports as to the outcome of the fighting.
AFLĂ imediat Știrile Publika.MD. Intră pe Telegram