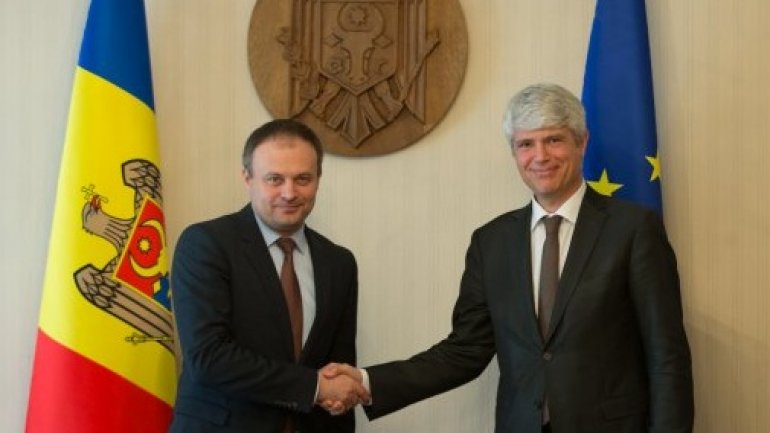 Switzerland will further support Moldova’s reforms agenda through projects in concrete sectors. Presently, the Swiss authorities work out a new strategy of cooperation with Moldova for 2018-2021.

The concerned subject was discussed at a meeting between Parliament Speaker Andrian Candu and Kiev-based Ambassador of the Swiss Confederation to Moldova Guillaume Scheurer, the parliament’s communication and public relations department has reported.

Andrian Candu thanked for the punctual and constant support for carrying out the reforms underway. Within the current strategy of cooperation with Moldova for 2014-2017, Switzerland provides Moldova with 55 million Swiss francs, especially in such fields as water and sewerage, health, migration and development, doubling the volume of financial assistance provided in the years before.

“Moldova’s citizens have benefited from more useful projects, implemented by the Swiss side. We are interested in their diversification and inclusion in the future strategy of new assistance sectors which are to meet the country’s concrete needs, especially in the public administration reform, sustainable development, energy efficiency and renewable energy,” Andrian Candu said.

The parliament speaker referred to packages of important laws approved by the parliament or included in its agenda, their enforcement and parliamentary control. The officials exchanged opinions on the social and political developments in Moldova, including the authorities’ concrete actions to ensure an attractive business environment for investors, justice reform, reform of the financial and banking sector, electoral legislative framework and public administration reform.

For his part, Ambassador of Switzerland Guillaume Scheurer stressed that efforts for Moldova’s modernization must be encouraged and backed.

“Switzerland further takes strong commitments for Moldova’s development, with a portfolio of concrete projects for citizens. We will continue supporting you,” the Swiss official said.

Switzerland is one of the most important bilateral donors of Moldova. In 2010-2013, 50 projects on technical and humanitarian assistance worth about 30 million Swiss francs were implemented in Moldova with the support of Switzerland in such fields like health and drinking water supply