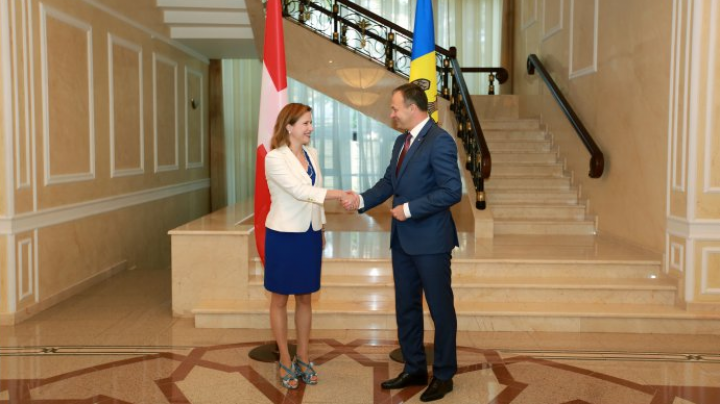 Switzerland will further back the reforms in Moldova, encouraging their continuation. President of the National Council of the Federal Assembly of Swiss Confederation Christa Markwalder made the statement at a today’s meeting with Parliament Speaker Andrian Candu, the parliament’s communication and public relations department has reported, Moldpres informs.

Christa Markwalder pays a visit to Moldova, being the first one by a head of parliament from Switzerland since setting the Moldovan-Swiss diplomatic relations.

Candu said that Moldova further relied on the support of Switzerland in carrying out the European integration and implementing reforms for the country’s modernization. In the context, the speaker appreciated the activity held during 15 years by the Swiss Cooperation Office in Chisinau and thanked for the technical assistance provided to Moldova.

Candu also referred to the priority reforms Moldova had to implement, especially, in such sectors as: justice, financial-banking, fight against corruption, energy sectors, as well as the need to create attractive conditions for the business environment and protection instruments for foreign investors. In the context, he noted that the parliament had already approved a string of laws to speed up implementing the Association Agreement.

Christa Markwalder pointed out that Switzerland would further back the reforms in Moldova. The official said that the Swiss parliament decided to continue cooperating with Moldova, and the Swiss authorities had mandate to prepare a new cooperation strategy with Moldova for 2018-2021. The official noted that consultations would be organized to set strategic priorities, being invited MPs from Moldova to provide proposals.

In 2010-2013, 50 projects on technical and humanitarian assistance have been implemented with the support of Switzerland, amounting to about 30 million Swiss francs, in the healthcare and drinking water supply sectors.

Christa Markwalder pays a visit to Moldova on 8-10 September, at an invitation of Parliament Speaker Andrian Candu. The official will attend a festive ceremony organized by the parliament on the 25th anniversary of Moldova’s independence and will have a string of meetings with the head of the commission on foreign policy and European integration, Valentina Buliga, Prime Minister Pavel Filip and Director of the Swiss Cooperation Office Simone Giger.