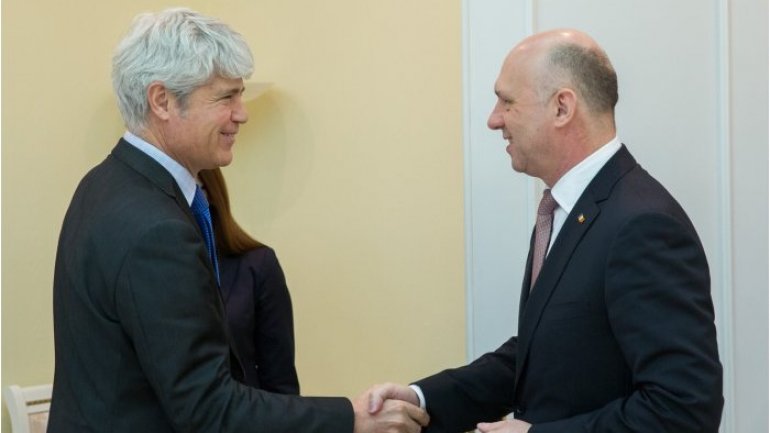 Prime Minister Pavel Filip has had a meeting today, March 28th, with Kiev-based Ambassador of the Swiss Confederation to Moldova Guillaume Scheurer.

The prime minister highlighted the constructive character of the Moldovan-Swiss relation, expressed through successful projects in the health, drinking water supply, migration and development sectors. At the same time, Pavel Filip emphasized the prodigious work of the Swiss Cooperation Office in Chisinau and its considerable contribution to strengthening the bilateral relations.

The PM thanked for the doubling of the financial assistance provided to the country within the present strategy of cooperation with Moldova of the Swiss Agency for Development and Cooperation for 2014-2017. Among the successful Moldovan-Swiss projects, the prime minister stressed the regionalization of pediatric emergency and intensive therapy services and the reform of mental health services.

“We have set to carry out a quite rich agenda of reforms, so that, during 2017 and 2018, the citizens feel the impact of changes for the better” , said the Prime Minister.

For his part, the ambassador of the Swiss Confederation to Moldova said the Moldovan government’s merit is its capacity to maintain political stability and ambition to change things for the better, as well as the tendency to make the European way irreversible.

“I am happy to find out that the relations between our countries are based on more than a technical cooperation, as we also have a fruitful collaboration in the political sector as well. Although the reforms are not popular, it is important that you carry them through” , the Swiss diplomat added.